I remember myself writing the last entry and thinking that if nothing bad happens, I would be releasing the stairs truck at the end of the first week of March, right… so bad things happened! 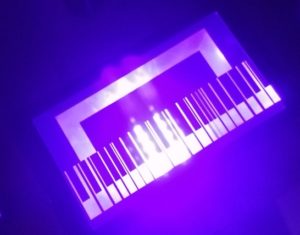 No, I did not buy myself a piano… that is an apparently failure of the screen of my printer.

I have been having issues lately to get proper prints of the stairs truck, so running a check on the equipment showed this weird defect on half of the screen, whereas it should show a complete rectangle and not a series of rectangles.

This printer has been already working for some months… and as I read about it, both LCD screen and UV are prone to failure with time. A replacement is due to arrive today and I hope to fix this issue soon and mantain the release date of the stairs truck as intended.

I only have one equipment at this moment… so production have to be stopped until this issue is solved, my aim is to have more equipment in the future in order to be able to keep producing units. This is the problem of technology, it works amazingly when it works… but nothing is perfect and when things start to fail, finding a solution requires some time.

Enough chit chat, it is time for me to focus on solving these issues, and will do my best to get things back on track.

I would like to inform about how are things going with the stock units, the stairs truck and the 1/144 figures.

I am coming from a few days of having to overcome several things, I had an issue with one of the stairs truck part (handrails) that had to be remade and produced in a different (stronger) way.
This took me a few days since I had to change some things of the original design for the later production.

The stairs truck units have already been started, there are four units made so far, so I am expecting to have all units made this week. As you know, these kits do include several small parts, thus some time is required to package everything as best as possible, I actually test (prepare) the assembly of two specific parts on each stairs truck set.

Instructions of this model have also been made, so basically is just a matter of finishing production and packaging, my prediction is that this item and the rest will be available again around the end of the first week of March.

On regards the 1/144 figures; the baggage cart workers have been made with winter clothes and no helmet, as well as in summer clothing without helmets.

Cabin crew figures have been tested and several adjustments are required. There are very tiny details that I believe are best produced and represented by using a thin wire, which will be used for the baggage extended handles as well as the purse straps. This set of cabin crew consist of: captain, first officer and 6 flight attendants, 2 of which will be in walking upstairs position, one preparing for walking upstairs, two walking towards the stairs and one (the last at the queue) watching her wrist watch.
This set is intented to simulate a short-domestic flight, in the future, other combinations will be made with more crew representing international flights.

I am still unsure if I will have enough time to have the figures for the release day of the stairs truck (and the rest of GSE items) but I will do my best to have as much as possible available at the same time.

No photos this weekend I am afraid, I am just mainly focusing on solving issues and moving on with production. I hope however to have better luck next time with the crew figures and upload some photos at the end of the week.

Thank you all for reading.
Best wishes,
Guillem

Today Sunday I would like to share with you the work I have been doing during the last couple weeks although the basic computer-work was started a couple months ago. It is the preview of the stairs truck based on the model TLD ABS1740.

I have to say that although the model is finished, some parts require some little adjustments (I am talking about adjustments of less than 0,3mm). I am satisfied with the model because it was a challenge for me to make this movable, to go from an A320 door height to an A350 door height for example. On a side funny note, the two support bars I made them in a way inspired by a container loader truck that I used to play with when I was a kid.

The adjustments that have to be done are concering the two retractable colums, since I reworked mine for this example model, this adjustment will already be done on all units made from start.

One thing that is very important to mention is that, delicate or easy-to-lose parts will be added as spares in each stairs truck set, the resin is strong enough to not to break, I actually assembled 3 of these stairs truck and none of these parts broke, specially the thin bars which may seem weaker, they do the job perfectly fine, but to give a bit more confidence, I will be adding spare parts.

What does the stairs truck set include?
The usual parts as similar to the other GSE; solid wheeldrive (that means no flat PE part), handbrake, seat, dashboard, driving mirrors, and a set of decals which will have a generic title “Airport Services” as well as other photoreal elements such as head lights and tail lights, dashboard decal and the TLD logos. No driver figure/PE this time.

It is my other objective to release new figures at the time I release this model and the other GSE units, these figures will be; ramp/baggage workers with helmet and also a set without helmets. For this stairs truck model I will produce at first a set of cabin crew, which I may call “Short haul” and “Long haul” , basically the difference will be in the quantity of crew in each set and later after release, a set of passenger figures.

It may take me a little bit of time to make the first units because I am also currently working on the other GSE stock. It could be better for me to add to the catalogue each item as I finish their units, but I like to add units of as many items as possible in order for the customer to save on shippings if there are multiple items in the wishlist.

The plan is; work with the stock units of all GSE this week, prepare the stairs truck instructions and start making stairs truck units at the end of this week. Making units of this model will probably take me a week (taking into consideration the packing process) so I would say that from today 15 days is what I need to have the store with new units of GSE as well as the stairs truck.

Thank you very much for reading.
Best wishes,
Guillem

The stairs truck has gone through the fitting test, there are currently a few points that need to be fixed; the length of the “hydraulic rods”, thickness of the driving wheel and a few other bits, but overall I am glad to see that the height of the stairs goes from the A320 door ledge to the bigger airliner doors such as the A350, B777, B747 etc. 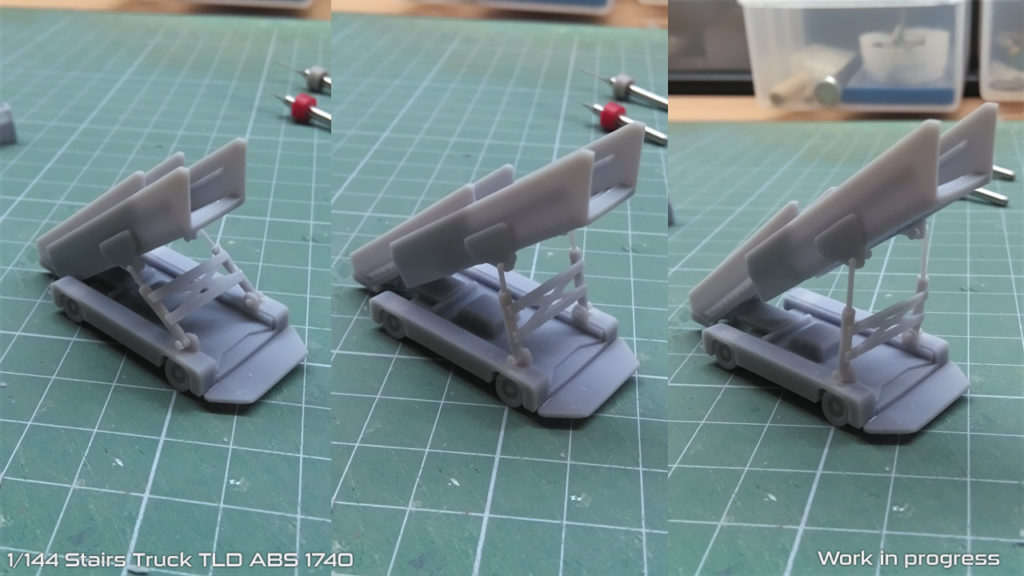 The rod actually slides inside the tube while the stairs rises or lowers, I kept in mind paint thickness so that the slide between the two parts can be smooth.

Finally I have been able to paint the baggage carts / belt loader figures to get a better view. 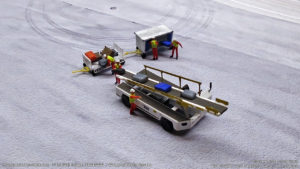 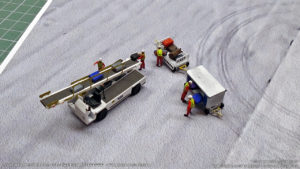 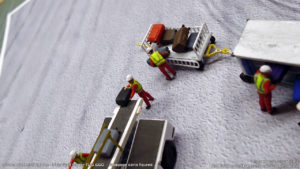 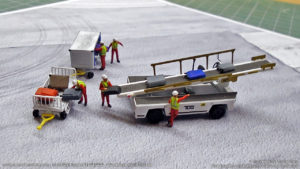 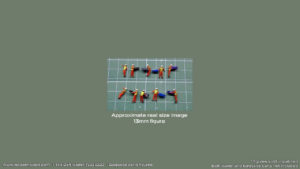 On regards the release date for the stairs truck, there may be a delay due the availability of materials, however, there are other areas to work on (instructions, decals, figures) while I await for the material (due to be received at mid week) so this also applies to the stock units, which are currently being produced (PE) and later the resin parts will be made.

It is normal that some units (most now) are out of stock due the recent opening of the site, so I am currently making more units of the GSE and will be updating the catalogue as I progress with them, so I am still trying to find the right balance/routine after the initial release of these items.

I also have news about the 1/12 B737 cockpit, I have to say that I found a way to work with it one/two days per week. Everything that I have done so far is discarded, it may sound crazy, but the reality is that I work faster and better with the computer and the 3D than working by hand, so this means that there is progress going on even I don’t upload it and so far, I have progressed in two days as much as I did in two weeks in the past.

For this particular project, there will be a first 3D model printed of each panel, and later these will be casted using the silicone molds and resin, the reason for this is to save some costs on resin and will be done only for bigger parts such as the sidewalls, pedestals etc, all other detail parts will be made in resin as the GSE resin parts.

By the end of next week I  expect to upload photos of the stairs truck finished and some progress on the other type of baggage cart / belt loader figures (summer clothing).

There is a lot to do, I do not forget the 1/200 scale models which I will also start soon, however this 1/200 models will be added into the store after I finish each one meaning that not all of them will be uploaded at once but in order of completion.

That is all for now, will update the blog again next weekend.
Best wishes,
Guillem