This will be my last entry till I am back in September, as I mentioned earlier, I want to take some days off, I will continue to ship orders as usual and continue to work on stuff and hopefully I will be able to bring news when I am back in September. I need some time to get myself recharged as summer is very hard for me where I live, it affects me physically, mentally and also affects the materials that I use, so I think it is a good time to try to cool down, make some modeling and advance on projects in a pressureless way.

I am awaiting a response from the printing company to have the decals silk screen printed, so if everything goes well, livery decals will be back before the end of the year.

I have to admit that I am feeling a bit disappointed with the 747 cargo set as I am having difficulties with the printed floor. This is a problem that appears after the part is fully cured and it happens to all sorts of printing methods, materials and printers. When a part is flat, thin and long, you are more likely to have bending issues, this is why the conveyor of the belt loader is casted in polyurethane resin.

I am studying the possibility to make the floor of the cargo holds already built in the fuselage or modify the bottom of it to produce it differently. This would also be a problem for the main deck, but I always had planned that it would be casted in polyurethane resin, being a solid floor there won’t be any issues.

I have finished the 1/200 belt loader, but now I am onto the final step, which consists in preparing its product page, the photos, the decals, the instructions… PE was made and tested and all is so far so  good. I have been able to make the figures for the 1/200 belt loader altough the summer version requires modifications, have been able to make the wheeldrive solid/in resin as well.

That is all for now, I hope to bring something new on September, I wish you all have a nice month of August and be safe.

I have been progressing a little bit more on current projects while also trying to adjust a few other things about the current GSE models, more than adjusting, simply re arranging things so that it could be a bit easier to produce/pack them.

On regards the 747 cargo project, both fuselages are now at the same step, the sidewalls are smooth so I expect to do something with them to imitate the lining.
The deck that you can see for the FWD cargo holds is actually my second attempt, as I did one the other weekend, now I have it where I wanted it since the first version was conflicting with the door level.

The door frame will require some modifications at the lowest part, on the real aircraft the wall that contacts with the door (the latches) is vertical, but due the cut that was done and due the fuselage being cylindrical, the face where the latches go is diagonal. There is some work to do on the door area, I will be reworking it next weekend. This is another of the reasons why I want to cast the whole thing, there are modifications that required to be done in a project as big as this, it does not work by simply opening the door, and as you can see, the side walls had to be build directly on top of the fuselage.

The FWD floor will be different for Revell and Zvezda kits on regards length, this is due the kit limitations as I could not push longer with the Zvezda due the plastic part for the nose gear, so that section is a few mm longer on the Revell, won’t be an issue since sight can’t reach both floor ends.

The 1/200 GSE models are coming along very good. I have started assembling the belt loader for testing and example purposes and so far so good, I still have to make the PE and add the wheeldrive. This time the belt loader will come with one single figure version, winter without helmet, the reason for this is to ease on stock production, although I may give it a try and do the other variants as the 1/144 scale.

The Houchin GPU C690 is also being tested, soon to be assembled/painted, again for example purposes.

Both 1/200 items are going to be in the store soon since the first productions were coming out very well from the start.

Nedless to say the belt loader pictured here is stil a work in progress, PE is yet not in place, some parts are not yet added and some decals are still missing on the conveyor.

Next month will be very important to me, because there are some things that I want to do that I never have the chance to do, so I will take a couple weeks “off” and try to reorganize/make things.

It won’t be fully holiday for me, I will still be dispatching orders, I will still be making units (slower) but I want to take this time to enjoy modeling, which I nearly forgot and assembly at least one airplane. There is hopefully going to be something tangible on the 1/12 B737 cabin project, it will be time for me to check what are the steps needed for the current projects and prepare the next 1/200 GSE because once things are a bit more equal in the catalogue between the 1/144 and 1/200, I will start the next 1/144 GSE, the FMC15i cargo loader “universal”.

Today I want to share a very little progress that I am doing with the Forward cargo hold on the 747-8F (at the moment, the -400F will be coming later).

I have been studying carefully the reference photos that I could find as well as a very extensive manual. So far I am trying to reproduce everything that I see from the 1/1 model, for example, the ball rollers of the loading platform are the same number than that of the real aircraft. 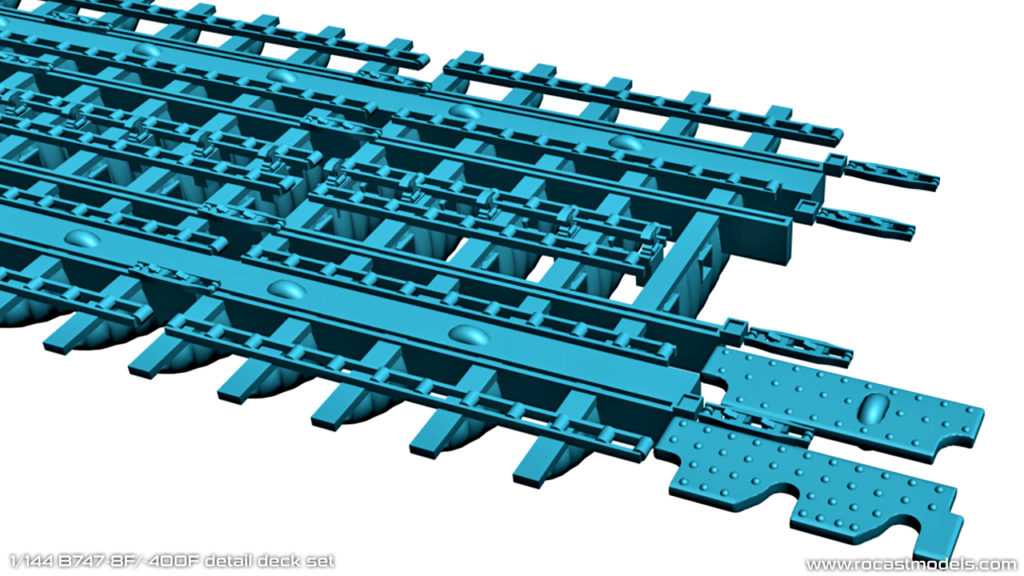 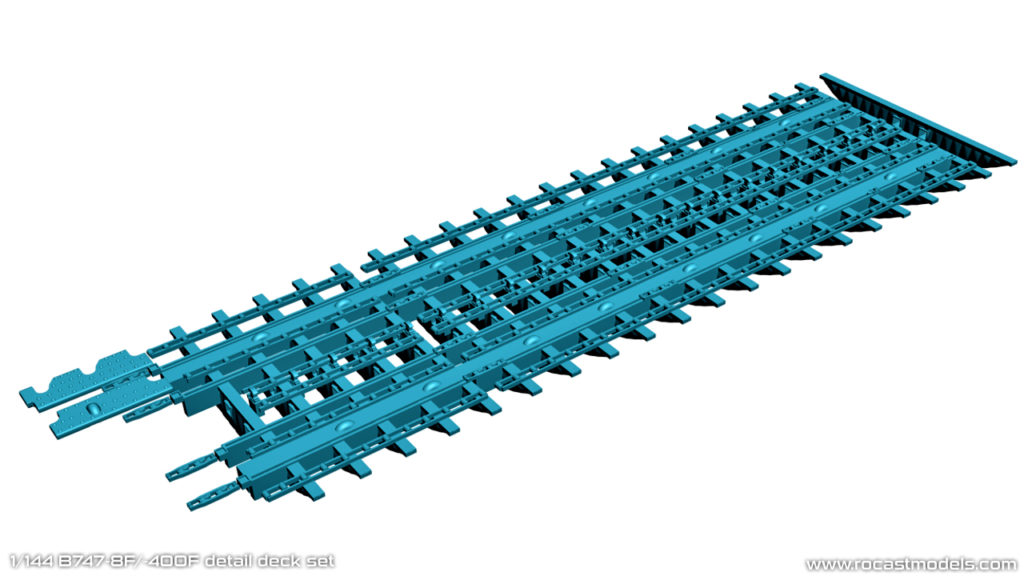 The structure panels have this kind of insulation texture, although I am at the moment thinking about making them a bit thinner. There is still some work to do which I expect to do between today and tomorrow, because my goal is to test fit it this weekend on the model.

These photos are a work in progress so I am at the moment working mainly on the platform. To my surprise, to floor is not flat, manual indicates two walkways which are also the place for some sort of wheels, so basically you can see through the airplanes interior and see the structure. Rail tracks and such are placed on top of these structure sections.

So this is how at first, I would like these parts to fit, the fuselage will have the inbuild sidewalls and then the rail system which also includes the entry platform and structure will be placed inside during the building process. If you recall that white plastic floor I showed on the previous entry, this printed part will take its place.

That is all for now, I hope that if things go well I can do some more progress this weekend, I also need to advance with the other fuselage.

Although I haven’t been able to advance as much as I wanted to, I finally finished the main structure of the B747-8F FWD cargo hold.

This is cargo bay is by no means finished yet, it is only the main structure; the sidewalls. The white floor you can see in the images is a “dummy” floor, it was needed to have it in order to make the sidewalls, the floor level was gotten from placing the plastic at the cargo door level.

I wanted to do the same steps on the other fuselage, but I run out of time, for the next weekend I plan to have the same steps done on the other model. There is still some work to do currently with this main structure, and that is to make both fwd and aft walls thicker.

On regards the floor, it will be made with the computer and it will represent the rollers, the locking systems and the platform with the rotating balls as similar as possible to the real aircraft. There is one detail that I like to include and this will be the different beams and sections which have the round shape of the fuselage under the floor level which can be visible in the real aircraft.

One last note for today’s entry, the side walls are now just a flat surface (although angled), but I expect to give them some volume to imitate the lining texture, the upper side will also have their correspondent details, decal markings etc. 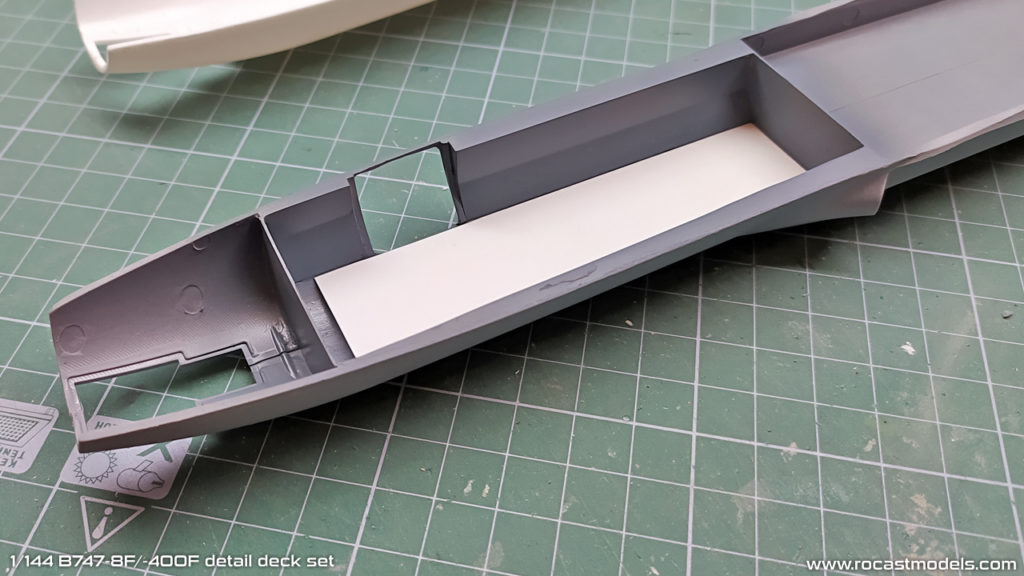 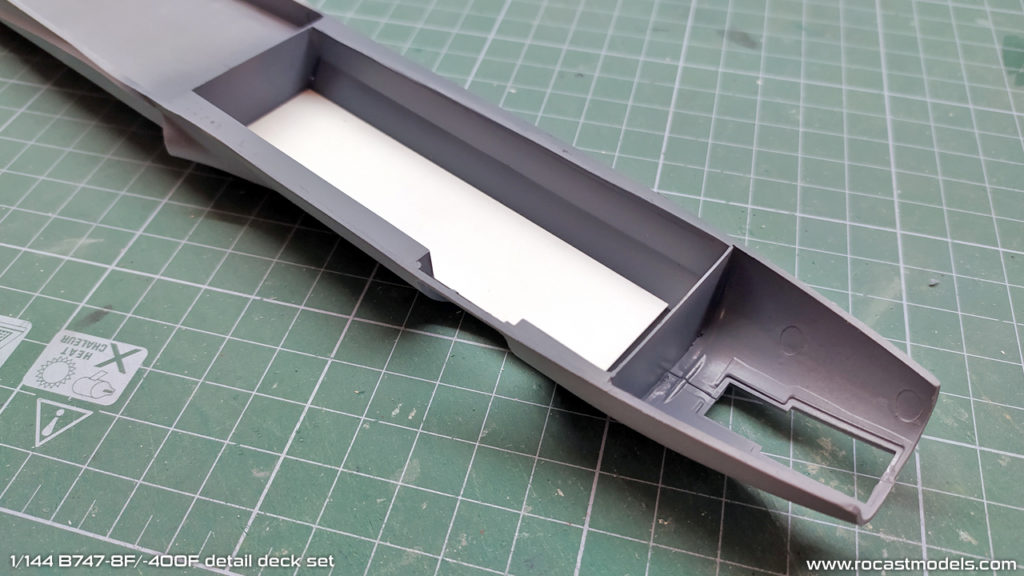 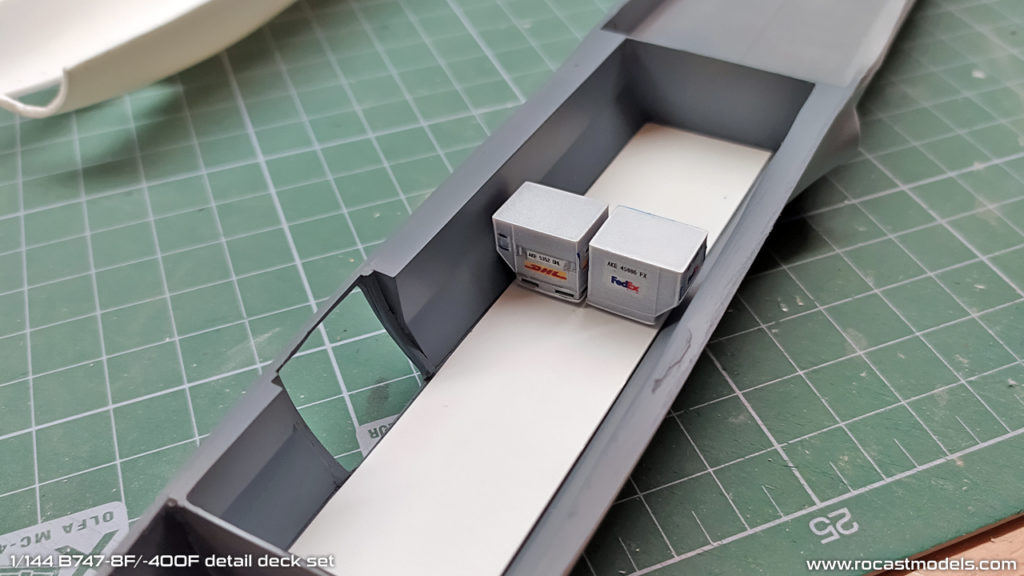