I have painted the Neo engines to check the result with the decals.

I have started the WiFi radome, but I am still not happy with its shape, so I will modify it by looking at more reference photos.

It has taken me a very, very long time. As they were made totally scratch built, I had to make five molds for each stage of creation as I could not go back in case of messing up the master part, no undo button.

The molding has also been a little headache as the easiest way was to separate the cowling into two, but that presented the problem to perfectly match both halves and it was really difficult to achieve this in such round engine.

Finally I choose to cast the whole engine as one part, and made one of the most complex molds I ever had to make. This will avoid having to match both halves, the need to use putty in such process and to avoid modifying the shape of the round engine by accident while sanding the putty for the union.

The Neo engines will go now through the preparation process as instructions have to be designed and later the first units will be made.

But prior that, I will fine tune the photo etch (for example, make the engine’s sharklets to have a curved base to fit on the curved engine).

I will also be making a Lufthansa finished version of these engines with the included decal set.

Recently I have been told that the sharklets that I made alongside the Neo engines were incorrect, short, curvy etc. So I decided to take a look into it a bit deeper and I made a new pair of sharklets.

This time, the sharklets have an edge mark, so that it can be easier to paint or in the case of our livery decals, to apply them on top more precisely. 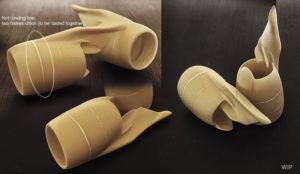 I have been working with the A320Neo PW engine which has the main shape done. I will focus the work on the pylon and then design the fan and exhaust parts.

This set will include photo etch parts as well as decals.

So far the work on the engines has been very slow but I expect to advance with it in the next weeks. 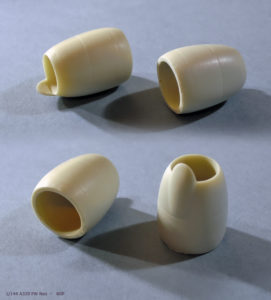 After several modifications to the A320Neo engine that I started some time ago, I have been able to finish the main shape and thus leaving it ready for next step.

I am currently using drawings and self made drawings as well as reference photos in order to shape this engine as best as possible to match the PW1127G model.

Further steps will be to empty the engine as it is solid now and proceed to make the pylon so that I can shape the rear section of the engine with its cowling pointedly aerodynamic fins (sorry for the not so precise term).

Next photos will show the process with the main base of the pylon and in the meantime, I will study the best options in relation to the engine casting / assembly so that the different parts can join together as best as possible. 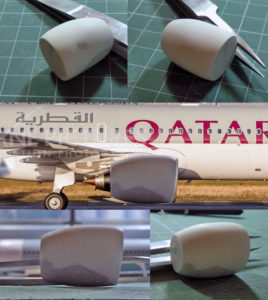 The main base of the PW engine for the 1/144 A320Neo has been made.
It is only a rough shape as it will be used as a base for further modifications and the latter details.

Comparing it to the original engine, I have to fill a little bit the upper area of the engine so that it can be steeper when seen from the side.

There is still a lot to do, especially as the engine will have photo etched fans, the body will have to be hollow. 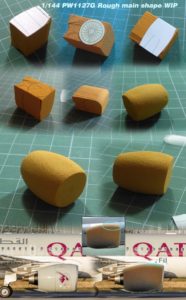