I am still alive, I am still here working as I can whereas unfortunately, thousands and thousands of people in this world aren’t. My best regards to their families and with hopes that this hard time can pass, at least that this rate can slow down.

I have been making more GSE units and I am also at the same time testing new items, I am still adjusting the 1/200 models since they are very small, they require extra work.
I am also doing my first tests with a fuselage extension for the Zvezda 787-8 to make it 787-10, I am thinking that if I am going to release this, that at least I can also make the fuselage windows and include a set of clear windows.

I am doing the first tests with the new A350 sharklets, and also I am at a very advanced stage with the new A319/A320/A321 Neo engines, both variants the LEAP and the P&W.

I will release these engines due the requests I got in the last months, I believe that they can be a very good addition for Zvezda kits but also usable for the Revell kits since the wing shape is the same thus the pylon fits the same way. I am not going to make them only resin/PE, but I want to create a photoreal and detailed decals for them. These engines are brand new, I designed them in 3D by using real reference images and measurements.

Thus, differences on both engines are noticeable, the LEAP has its characteristic lump at the left hand side, and the whole cowling is straighter whereas the P&W has a more pronounced slope towards the rear end of the cowling. Also the positioning of the spoilers are different and the pylon thin side is different as well. The exhausts are completely different, as well as the exhaust difusers.

Obviously you can see a small gap in the joint of both halves because these aren’t glued yet, the assembly will be cleaner because the two halves have been cut within the software, panel lines are now better represented and the size of the engines matches even closer to what they should be in 1/144 scale.

There will be a few extra resin parts than before, as you can see from the photos, but PE parts will need to be present as well for which new fanblades have been designed. I will be making some molds at the end of the week and will start the decal artwork soon.

I did not want to finish this entry without saying a big thank you to my dear friend Frank, who has been kind enough to send me a set of DVD’s with the story of KLM (photo of this in the next entry). I am at the moment enjoying every second of it, and for a youngster like me, it is fascinating to see the schemes from the 70’s all through the 90’s, not only of KLM, but also of other airlines now extinct. This is for me a very big source of inspiration to create more things in the future, trans-kits and perhaps even liveries from that era, which I now understand the nostalgia that can bring to people.

That is going to be it for now, I am still working as usual but with the difficulties added of the current situation. I have to use gloves for my work, I am dealign with lots of toxic stuff, the resin, the silicone and its catalyst, the acid from the etching process… so there is a high demand/donation to the nurses, carers, doctors, police who need the gloves much more than I do.

So, I keep progressing as best as I can and besides new stock of GSE items, I hope to put all these new items available when time comes.

I will try to not to extend myself too much on regards the virus since I believe everybody knows what is going on with it. However, I have to say that the state of alarm declared in Spain about 15 days ago has been prolonged for another 15 days as a safety measure, in fact, the peak will be reached within this week most probably. So this translated to the fact that I still can’t ship orders and I prefer not to do so because of the reasons I have explained in the previous entry.

Now on regards the projects, I am currently making units of the GSE but at the same time I am testing new items  that I would like to release once all these things can get better, the items that I will be releasing once things go back to normal are:

Here is a very (and I mean a very) early photo of the progress: 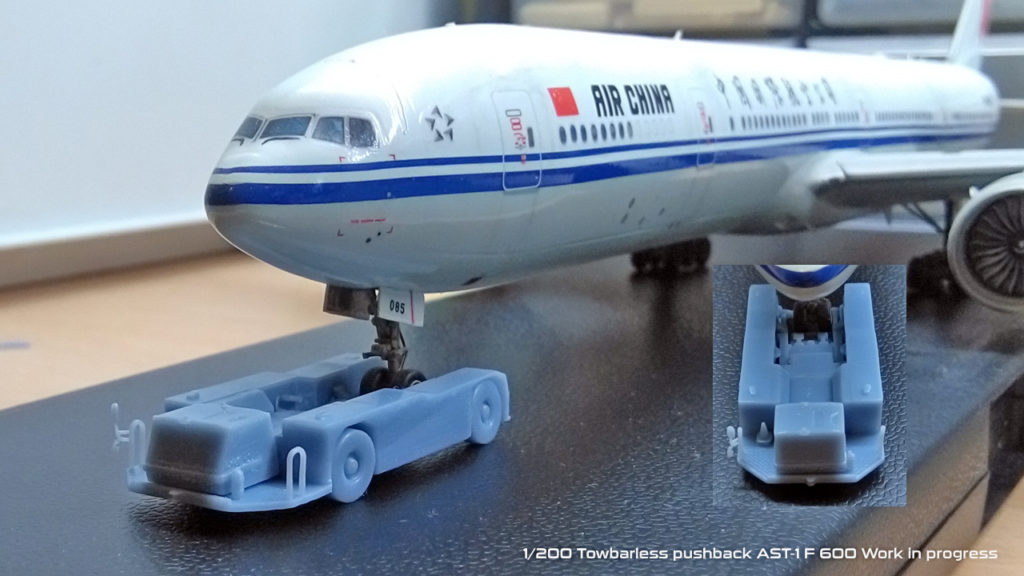 I am also working on the B737 cockpit, I must say that I hate to show renders of that thing without it being something physical yet, but I just wanted to let you see how is the progress so far, and yes, everything has been redone and yes, there  is a lot of work to do and to modify on the sidewall and the union with the main panel. 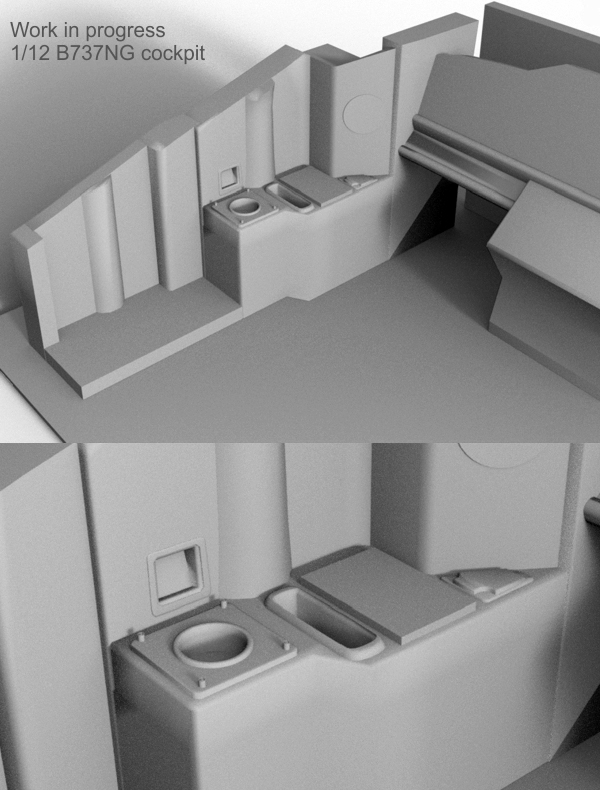 The cockpit is in a very, very early stage as you can see, and many things have to be finetuned at this point.

That is all for now, I am making units of the 1/144 GSE although it takes some time because as I said, things are quite different now with the problem we are dealing with, but I progress as much as I can.

The government declared yesterday the State of Alarm in the whole country land. This means that in order to slow down the number of infections by the Coronavirus, people must remain at home and only go out for the basic actions such as; groceries, take care of elderly, work, go to the drug store or go to the gas station.

It is not recommended anymore, but now it is mandatory to remain at home unless the actions I wrote before are really needed.

As such, I took the precaution of not shipping orders within the next 15 days which is a reference date that the government has fixed to see if the curve of people contagied diminishes and to see how things are evolving. This time frame may need to be extended.

Why I won’t be shipping orders during the next 15 days? The answer is simple, I want to follow the indications dictated by the government because I don’t want to either risk myself to get the virus and/or infect any member of my family nor anybody for that matter, elderly is specially very weak in front of this virus. Second of all, this situation is very stressful and I really need a time to reorganize myself.

Online store will remain open for those who wish to check their order status and have access to tracking information.

What will happen with the stock production?

At the moment I have material to prepare a few more items, however, I do believe that people are purchasing items for their homes that are far more important than the resin I use, therefore I don’t want to be one of those who adds to the “collapse” of the shippings of things that may be vital or important for people in need.

During the upcoming week I will be working with the computer, I will be reworking the 1/200 models, preparing livery decals for the future silk screen printing and working on other items such as the B737 cockpit, the A350 sharklets and another thing that I am preparing at the moment.

I may be using the remaining material for the testing of the 1/200 models prior I continue with the stock production which I will begin on Monday 23rd if possible.

I want to take this chance to organize things and keep on working with other things that I had to work on anyway.

I will write another update on the next weekend.

You may already be somewhat “tired” to hear about the coronavirus on the news, however, I would like to write a bit about how it may be affecting the store and the production of these items.

At the very moment I can handle the orders fine, orders will be shipped as planned, but, that does not mean that the government may take more and more measures and who knows if post offices will be closed since I think it is a place where there is quite the transit of people. I personally don’t think that will happen, but one never knows how things can go, I believe we haven’t reached the peak in Spain yet.

I am taking measures myself by protecting my hands everytime I have to sign on their tablets with the attached pen, so I hope that the post office can remain open and orders can be shipped as usual.

On regards material, people are getting in a kind of frenzee, I could not even find alcohol for cleaning the resin parts at my local hardware store, so will have to find it elsewhere.
Most of the material I use is purchased online, so I am not sure how this virus will affect the delivery times and such.

I personally don’t think that this will affect very much the production, but just a word to alert of what may happen, specially after seeing the situation of our friends in Italy.

People are staying at home, no school, no sport events etc, I think it is important to take the recommendations seriously, remain calm and try to go through these next weeks as prudent and calm as possible.

I want to dedicate a post about what is next after the release of the stairs truck which has been sold out recently, more units are being made and there are things I would like to explain about future projects, specially those which I am working with at the moment like the 1/200 GSE. I will comment a bit more about the 747 cargo deck set and other projects in another entry soon.

From here, a message to everybody, take good care and stay safe!
Best wishes,
Guillem

The stairs truck and figures have been released, stock units of the GSE have been uploaded. I still have to make some more units of certian items but that is all for now. 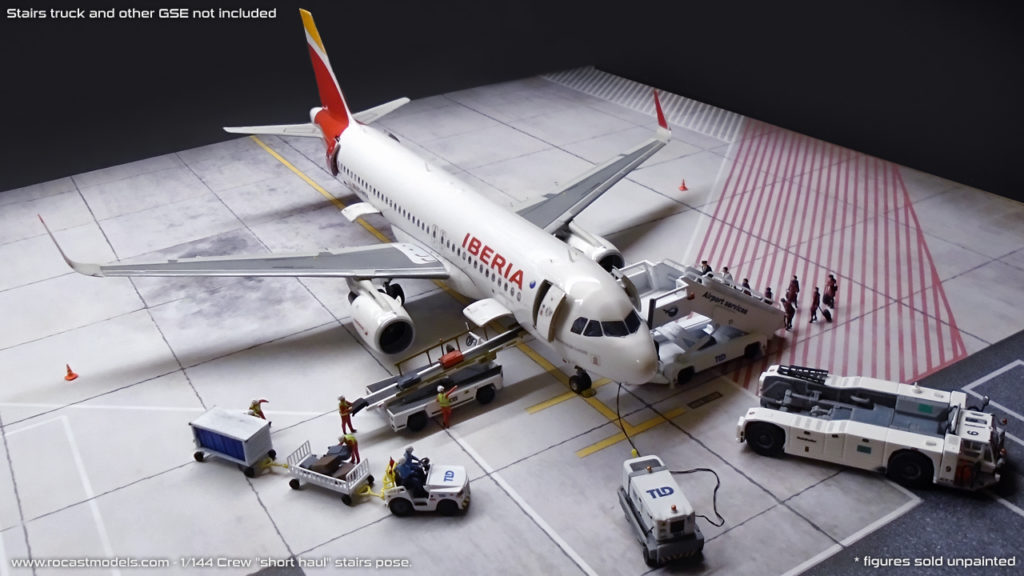 I have been able to complete the crew figures that fit the stairs model, both will be released on next Monday, I expect to release the workers without helmet as well.

I am not feeling in a high mood to explain more about things, but all I can say is that the set will include 8 figures and wires to make the purse straps and baggage handles. 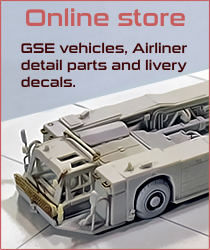