Finally after a few months since I started this project, I have been able to upload the LEAP-1A engine into the store. There have been 9 new livery decals made as well of the A320Neo and a new one for the A350-900. The P&W Neo engines have also been re stocked.

After the last photos, I wanted to attach the engines to an actual model, in this case the A321 from Zvezda:

This has been quite the inversion for me, I used more material than I thought in order to have a backup step in case things got messed up. I do not use a 3D printer so everything is done according to blueprints and images, thus if I did a wrong step on the master part, without the continuous casting, there wasn’t a returning point and work of months would have gone down the drain.

I also wanted to pay special attention to the engine decals because I think those will give an extra realism finish to the engines. I must confess that the P&W engine decals did not sell that much together with the resin set, and I understand that is because customers already purchased A320Neo decal sets from other manufacturers, however, you need to take into consideration that the decals that are sold separately (and included in each Neo livery decal set from the store) are specifically designed to fit the resin models, this is important on regards the pylon decals as I used the resin parts as template.

Why I decided a long ago when I released the P&W engines to sell the resin sets and engine decals separately was because a couple of reasons; one to make the resin engines more affordable if you really did not want the decals and second, because if a customer purchased a livery decal set from the store, those engine decals are already included and therefore there was no need to have them in the engine set.

The LEAP-1A engine is not the only item to release today, but also the A350 new sharklets for which I made all the decals of the -900 version to choose from.

The new liveries included in the catalogue: 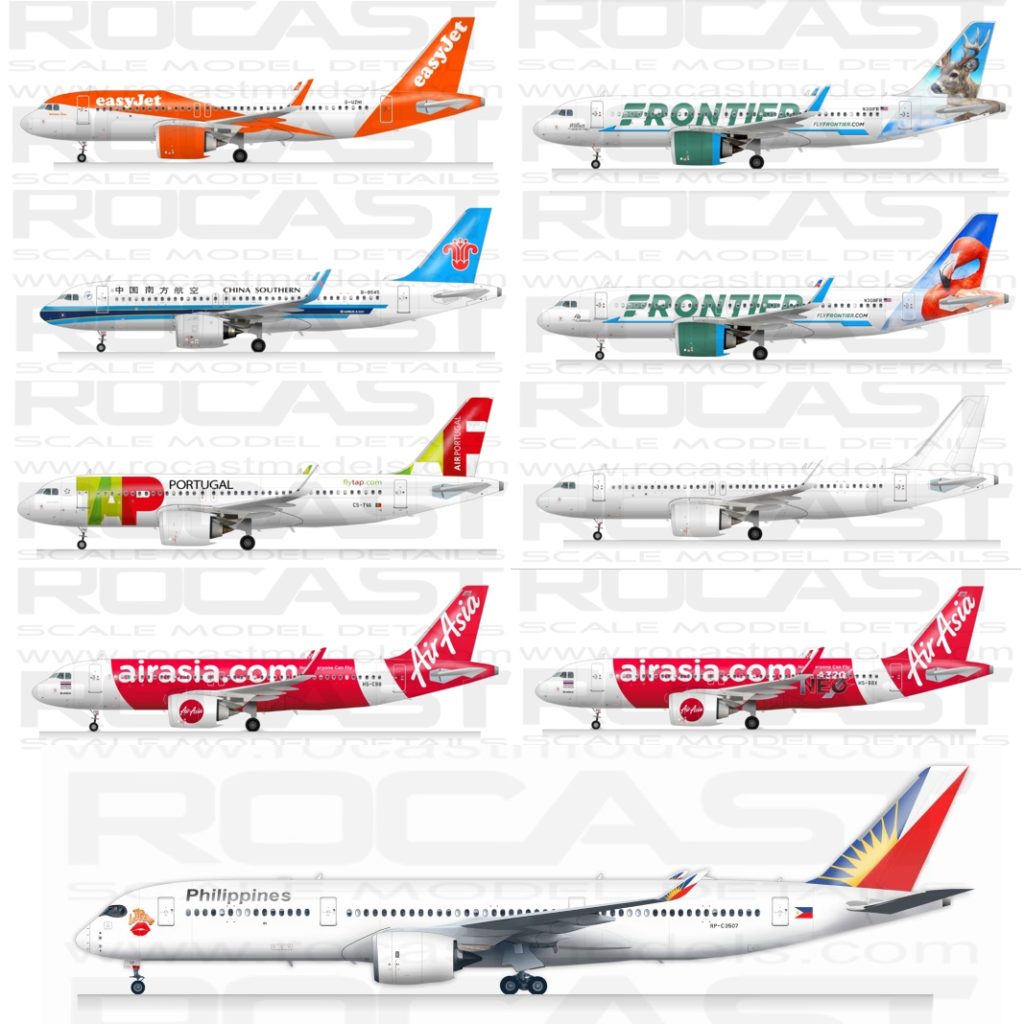 A couple things that I wanted to mention on regards these decals:
The EasyJet decal does not include the orange areas as decal, the reason is because the engines share the same color as these areas of the fuselage, so I preferred the modeler to actually paint these areas rather than having to try to find a paint for the engines that could match the orange decals, does this make sense?
I also plan to make the NEO titles version of the EasyJet A320Neos, this decal set will be released next month.

On the China Southern A320Neo, the dark blue cheatline between the two lighter blue decals wasn’t made. I know that it is perfectly possible to make that decal, make a cut so that it could fold onto the nose, but I had experiences with that before and, as the real aircraft, I preferred that color for that particular cheatline to be painted.

While making those decals I always keep in mind how would I do it if I was to make these models, which would be the best option and which one would give best results, and in this case I think that the combination of the two lighter blue decals with the painted dark blue cheatline would give the best finish. The instructions also cover the steps to do this process indicated as how I would do it.

That’s all for now guys, it has been a lot of work all this time, I must confess I am quite exhausted, but with the completion of the LEAP-1A engines, a new project will come in line, the FMC15i with the posibility of adding the double sill.
The 747 cargo project will also advance and hopefully I can get my hands on the 737 cockpit because it has been way too long since last time.

Thank you all for the support and looking forward to post new progress on these projects!