This will probably be my last post until I can have more stock units of the several items. As this takes a lot of time, I won’t be uploading the site with news about the other projects since I will be working with the stock also on the weekends.

People ask me about these items but I can’t really give a clear date, all I can do is just keep on going and doing as much as possible everyday.

The main thing is that last stock units were sold faster than I expected, thus most of items ran out of stock again (in the old store). For this reason, the online store is still not available because it would be meaningless to have it open without anything in it. After I finished the new molds, I am making the models that gave more trouble in the past, which is what I’ve been doing during the last week and that thanks to the new molds, I can produce a little bit faster.

These days I am working on stock units of the catering truck, the AST-1 pushback and the cargo loader at first, then once I have a little bit of most of the GSE items, I will publish the new store.

There are more decals for these trucks on the way from Wessex Transfers, so I am also hoping to put available the A320Neo PW engines with their decals.

With all this work, I only have time to think what I would like to do next, what steps to be done further with the 747-8F cargo deck set as well as the 737NG cabin.

I know there is more and a lot to be considered in the previous statements, but since I am going to cut the fuselage, I think is worth to have other options, and I would like to design decals for freigthers and converted freighters. Me, personally, I do like the 747 freighters, maybe just a bit more than the passenger versions, the fact that there are no passenger windows on the fuselage, makes this a better canvas to show the airline logos and different designs.

I do not know if this cargo deck set will end up being a trans-kit, but while I am preparing the stock units, I will be thinking about it. When thinking about freighters, I do also have in mind the 777 conversion as well, which at first, should be smaller work than this one with the 747.

Below photo shows an old Revell’s 747-400 kit from which very little to nothing I can use, except to check the panel lines and compare the lenght of the -400 and the -8 variants. Below the 747-400, the 747-8F model with the new cut lines drawn, decided to go with the cut after the L1 door in order to make this door open to show the ladder accessing to the flight deck. This may make possible to make the first section of the deck to be attached inside the nose section, and divide the rest of the deck into two sections (middle and aft). 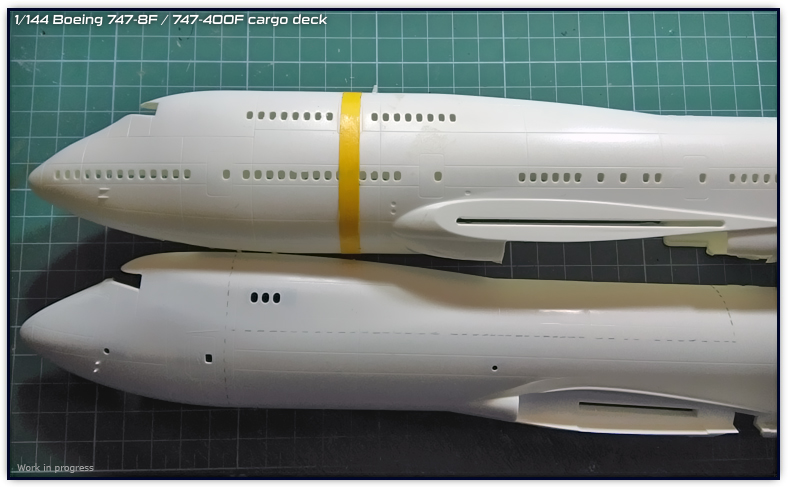