I finally have been able to finish all the versions of the cargo loader bridges, in total there are four:

The main difference between the two, besides the wide being widder than the standard, is that those that are to be equiped on the double scissors, their pivoting points are located narrower between them underside the bridge.

Also, the bridges and platform are going to be presented as seen in the photos, with their resin base in order to a) save me some time preparing, b) allowing you to quickly see which bridges you have.

As a side note, and I think I haven’t mentioned it earlier, the details are so small that upon looking close to the bridge and platform, you can actually see the rollers facing left or right as per the real rollers on the Commander loader. 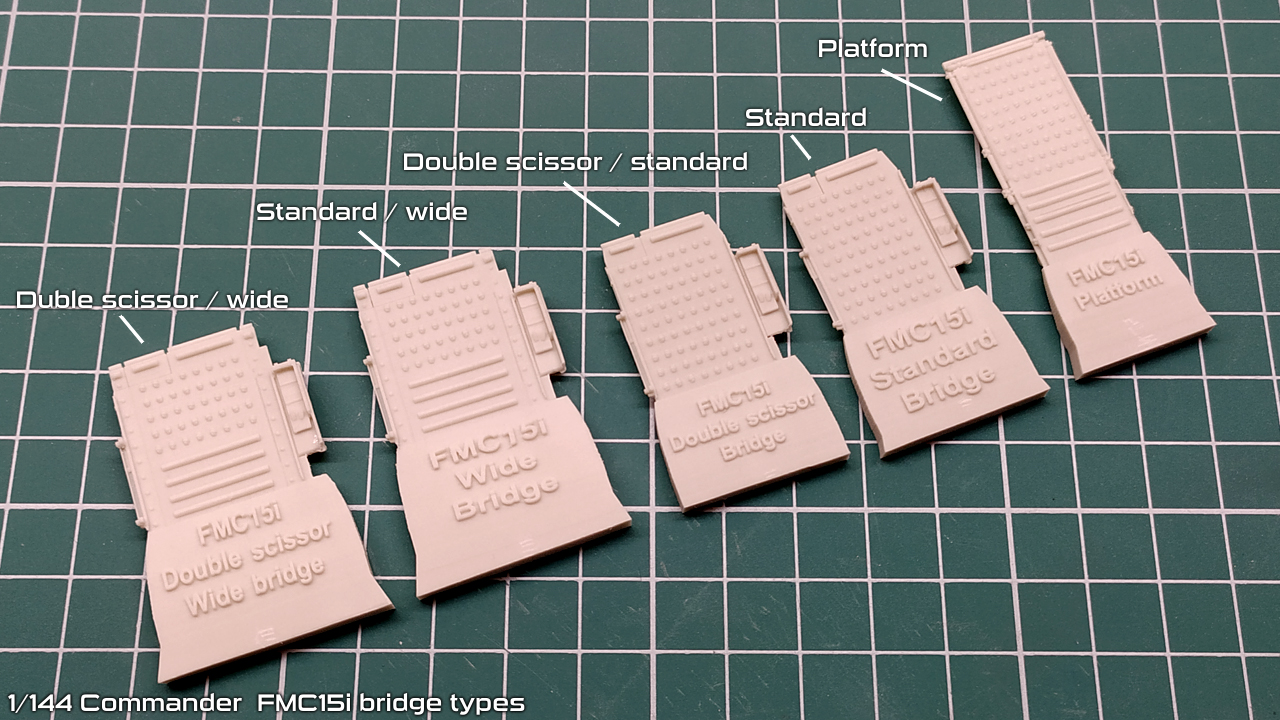 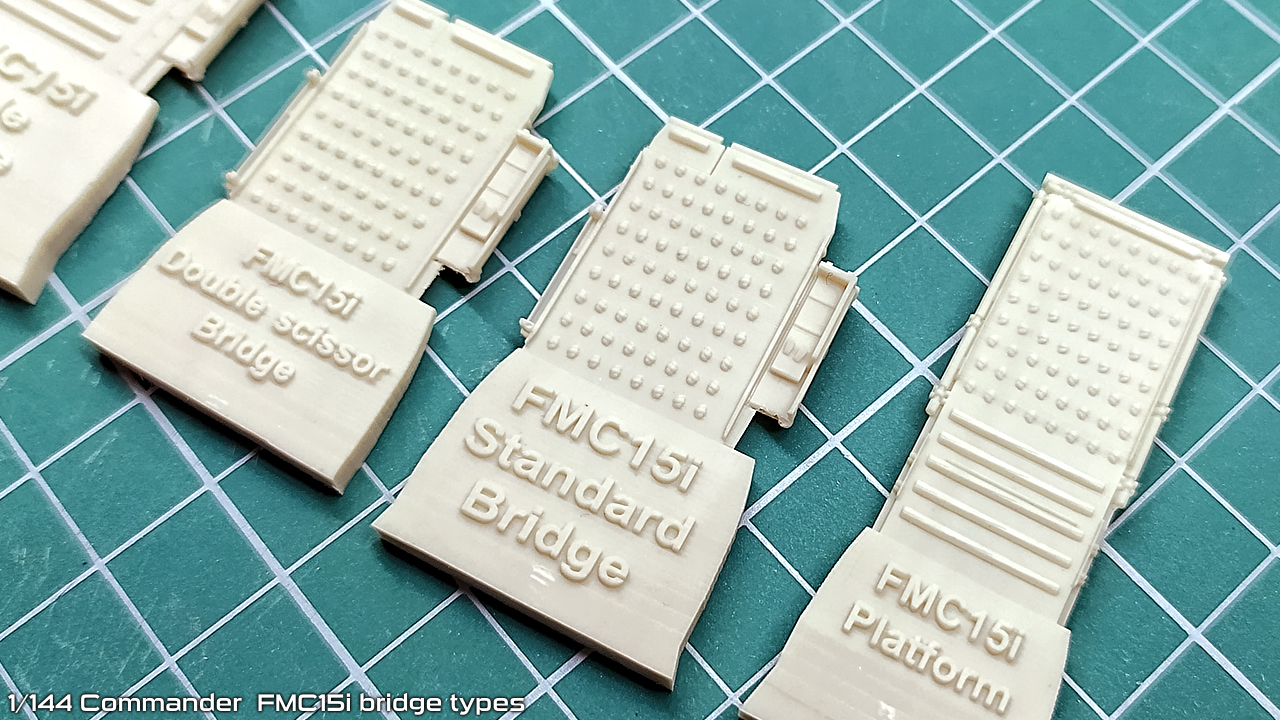 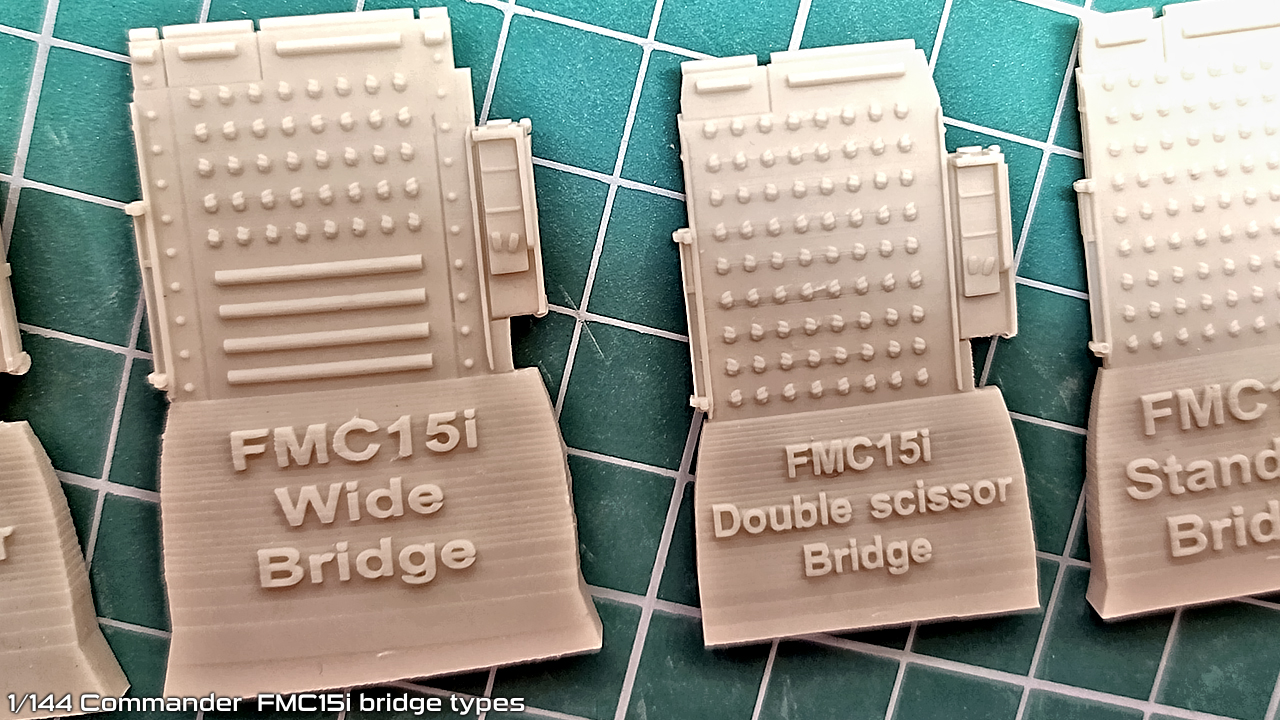 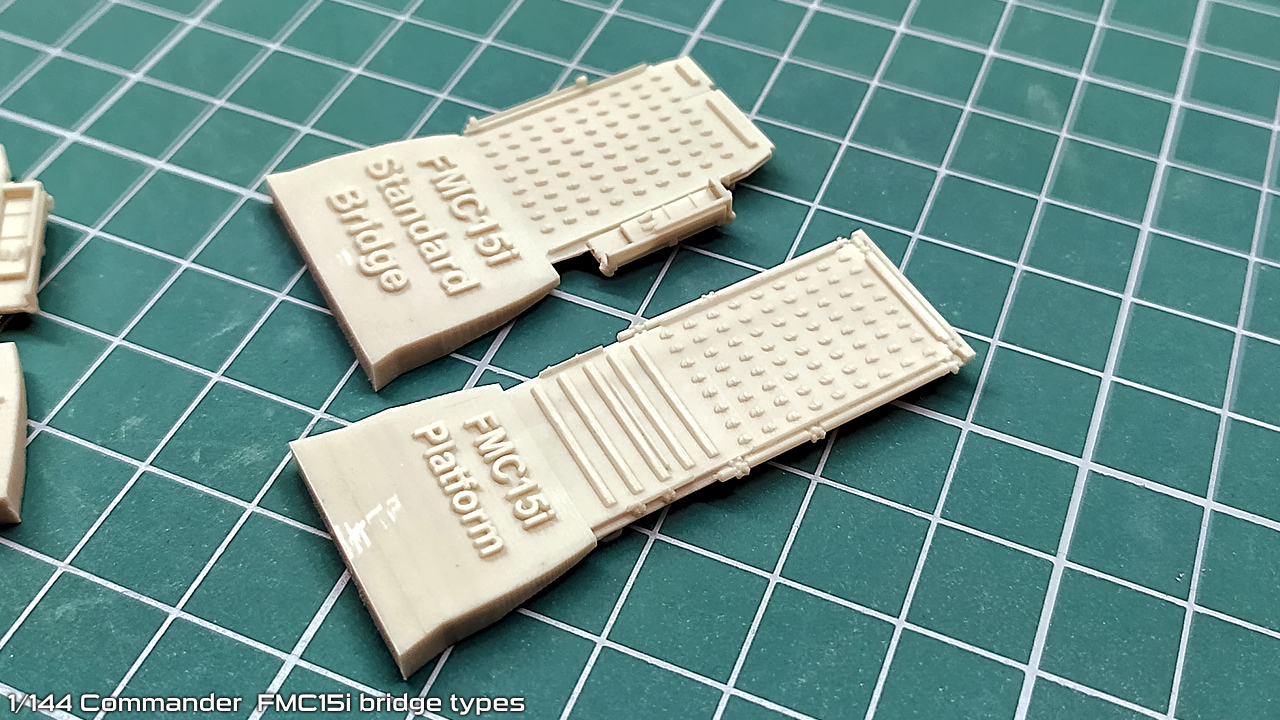 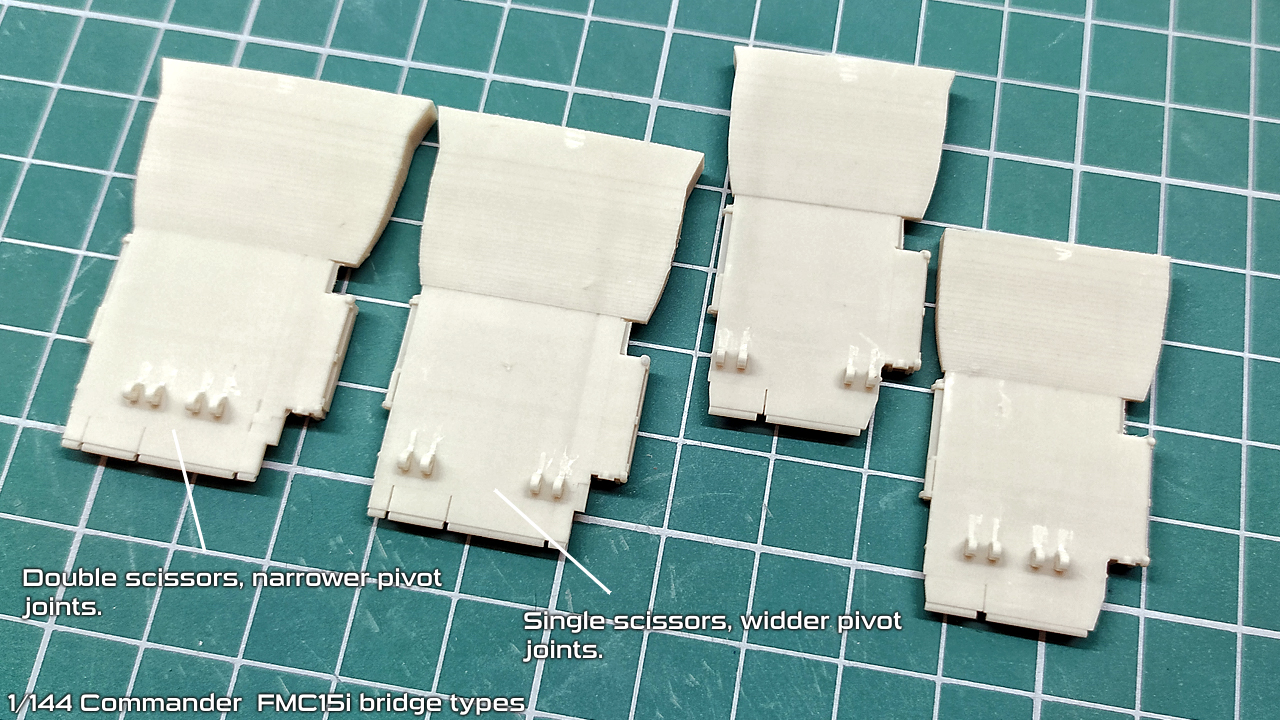 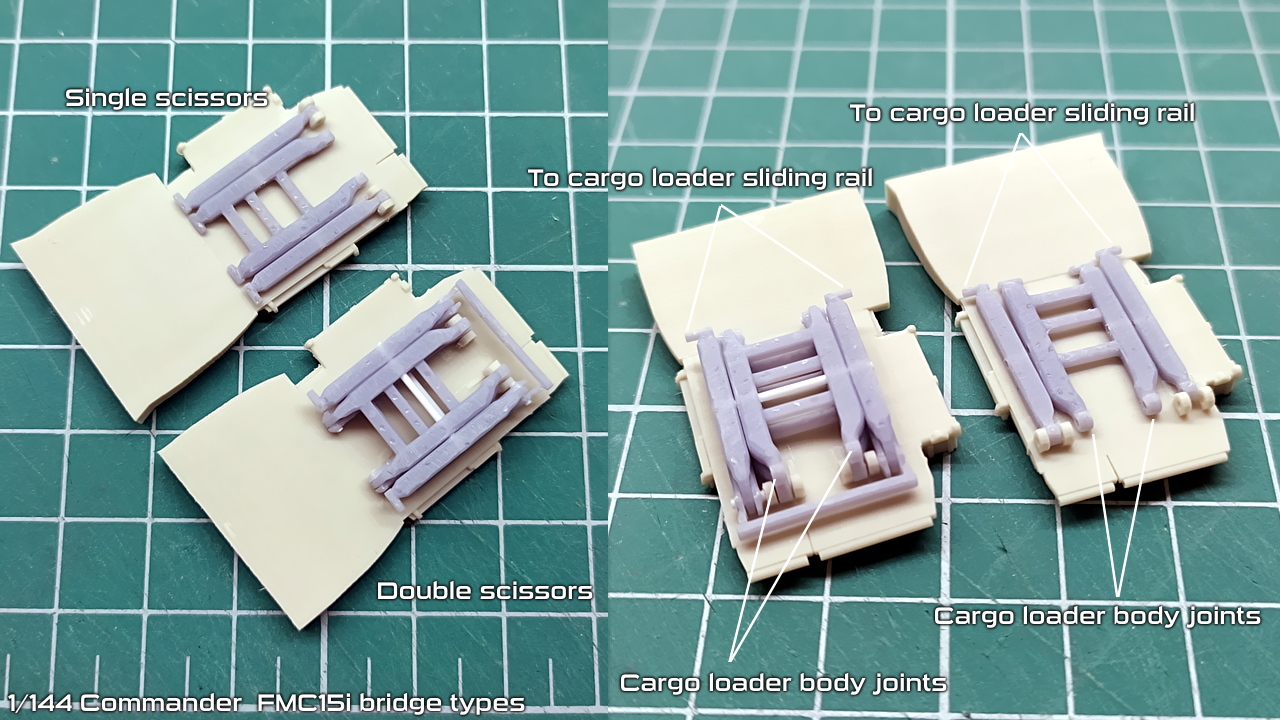 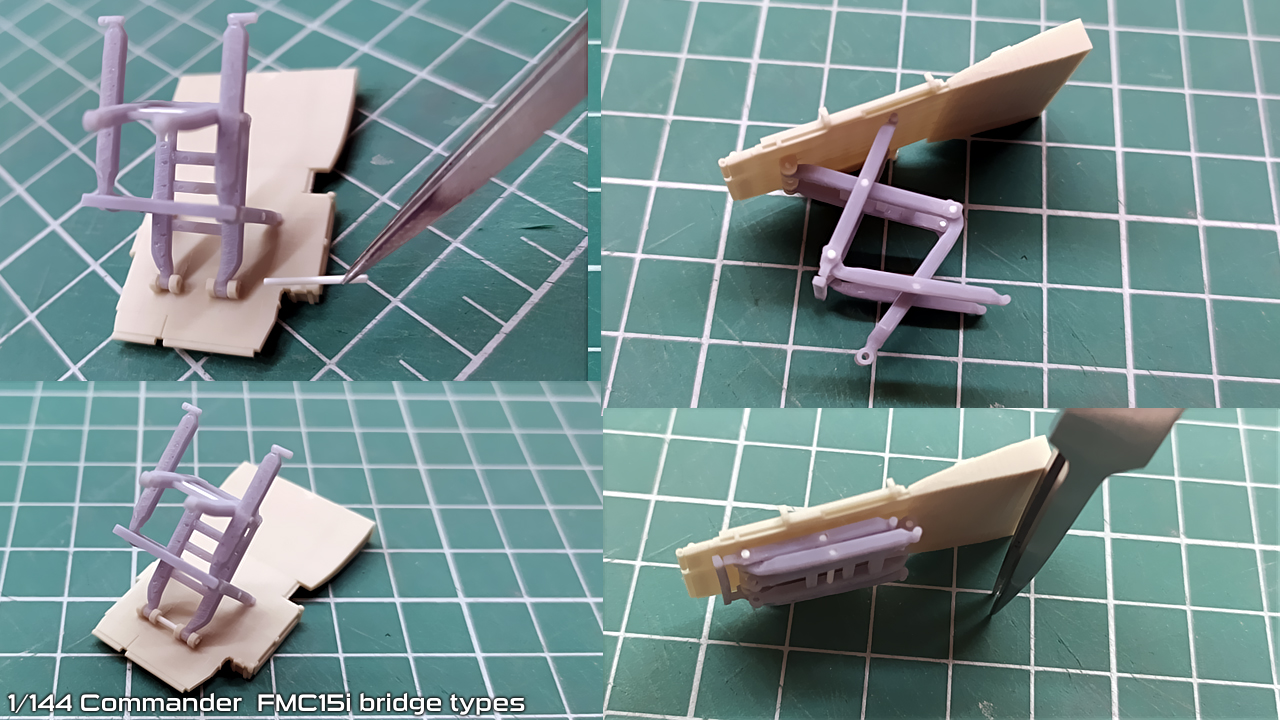 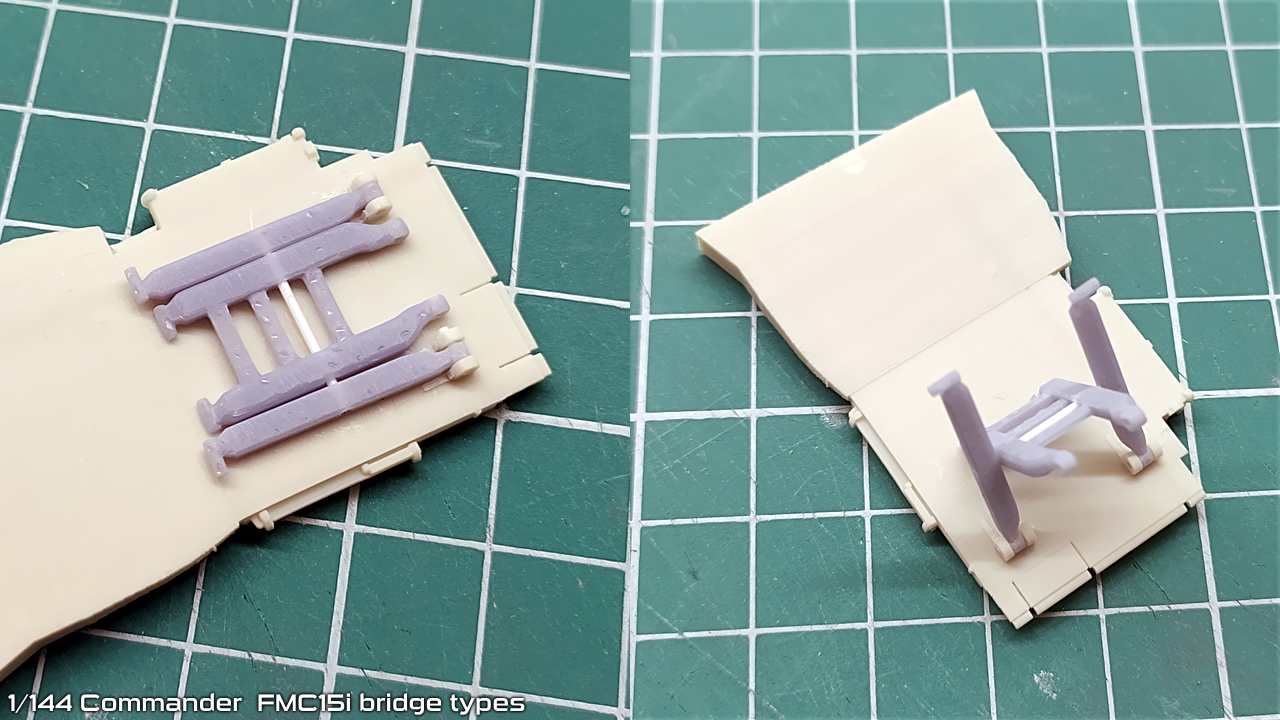 Hopefully these images can give you a better insight on how the scissors and bridges are assembled the one another.

Now my headache comes when thinking how I am going to provide these parts that are to be an accessory for the cargo loader.

Obviously, those who purchased the cargo loader should also have the option to select wether use the wide or standard bridge for the double scissors, because you can use your loader’s main body and transform it to double scissors or single scissors/wide bridge if you have not glued the body pivot points as explained in the instructions.

If so, the fact that the bridges will be sold separately, I too need to include the control cab as well as the other resin parts (rotatory lights, driver’s cushion) and photo etched parts that go on top of the bridge, right?

Suppose that you assembled the cargo loader with the standard bridge, but would like to use the wide bridge, I cannot just provide the bridge as it would still miss the control cab and ladder/handrails, therefore the purpose of switching bridge styles or scissors would not work.

This is something I have been thinking about for the last days, naturally the PE would increase the cost and time, as basically the PE of the standard kit is solely focused on the bridge parts. Shall there be an option, lets say, for those who haven’t build the loader yet and that only want to use one single configuration? In such case, PE would not be required as it is already in the base kit…

This is something I am going to have to sort out now as there are only four days for the release of all these items. Probably I will end up offering as many options as possible because everyone’s choice may be different, so PE will increase the cost, but that is something that not everyone will have to pay if one is just interested in one single config and hasn’t started the standard kit yet.

The rest of the items are half the way produced, so I will be restocking several items on Friday 12th.

There is going to be a small change on the packaging of the: LD3 trolleys, Tow tractor TLD JST-25, GPU Houchin C690, GPU TLD414, baggage carts (Open and closed types). These models will now be packaged in the smaller blister as there is no point in packaging such small tiny parts into the blister I have been using so far, there is a lot of space that is not used and this will also allow for a product with an overall less weight and volume which means that it may also save you on shipping costs.
The instructions for them have been redimensioned to fit the smaller blister and they are still perfectly readable, so that is the way that these are going to be packaged from now on.

I also had the chance to advance with the B787 rear galley and I am glad to say that finally the problem I had was overcomed and that it will be moving forward once I have all the items (most) back in stock at the store.

That is all for now, I will be restocking as many items as I can on Friday 12th, so hopefully I can have the time to do all.