This weekend I did a very tiny step on the current projects but it was a very good step for me to know where I am with these and what is coming next, alternatively I also have two good news.

On regards the B737NG cockpit:

I’ve finally got a piece of a composite fiber panel which is 10mm thick and that I cut down to 30x30cm, later I draw a grid of 5x5mm so that I could place all the elements of the 1/12 B737NG cockpit and start to see where everything has to go.
I am going to be using this grid for reference and symmetry since one of the steps I want to do later is to start with the glareshield and that will lead me to complete the front section structure.

Now, to hide all the rear side of the panels, I’ve considered two options; make just a flat wall or make the actual B737NG shell, so a portion of the cockpit would actually be a portion of the fuselage.
One of the things that I must keep in mind is to prevent the cockpit to have lots of shadows and therefore become dark, so I am studying every possibility and the same applies with the overhead panel. Perhaps the best choice would be to do half the shell such as a “cutaway” model and thus allowing the cockpit to have plenty of natural light.

While positioning the different elements, I realized that some work has to be done on the FMC pedestal panel and the throttle quadrant structure for them to fit better. I will actually set the center of the elements on the FMC pedestal since from it, every other panel follows. 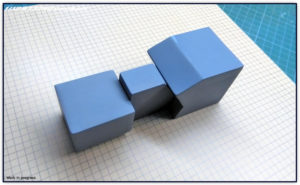 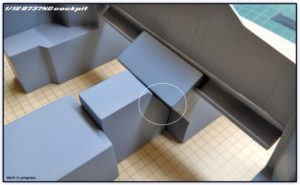 Before I move onto the glareshield, I will finetune these unions as well as those for the MIP/sidewalls.

I have been able to add  two new ribs which are fundamental to hold the deck as well as be a part of the AFT cargo holds. Now that the two rear ribs are made, I will proceed to make the last section of the deck. 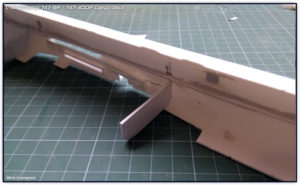 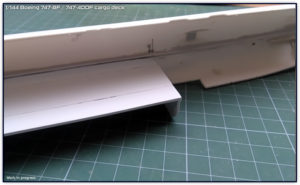 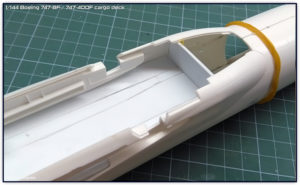 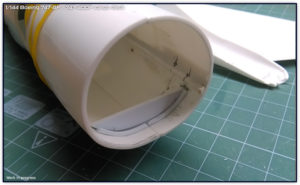 I am also starting to study how the rear end wall will fit in the tail section. I am trying to avoid to end the deck with just a circular part with the shape of the fuselage, what I intend to do is create a conic effect as the wall gets smaller inside the tail cone.
This rear wall will be fitted in the fuselage section and will then fit inside of the tail cone once this is attached to the fuselage. The deck set won’t include the tail cone, so that will be cut off from the fuselage kit and placed onto the casted fuselage.

One of the things I am concerned about is that if I add a “false” cone to create that effect, the model may go “nose up”, so I am also considering using ballast towards the front section of the fuselage.

I am advancing very slowly with everything, perhaps I should restructure my schedule but I don’t want to leave a project for too long time or else I will forget where I left it. This coming weekend I would like to at least have the LEAP-1A engine with the panel lines engraved and complete the rear section of the cargo deck. As for the B737NG cockpit, I will require a longer “session” to do the steps mentioned at the beginning, but now that I know what do I have to do next, I feel more confident and wishing to start adjusting those panels very soon.

On regards the two good news; one is that this past weekend I have been experimenting with a filler for the polyurethane resin and I am very happy about how it performed, this will therefore save a lot of costs to produce the B737NG cockpit since I want to make the different panels and pedestals solid, saving costs with this material will also represent in a cheaper price for the product. I liked the initial test very much, so I am really looking forward to make use of this on the cockpit.

I am also considering using the filler for the 747-8F/-400F cargo fuselage, but for that I still need to do another test.

The second good news is that I am doing some tests in order to achieve the white of the decals to be more opaque on bigger dark areas. It does not mean that the whites aren’t opaque now, but that I may be able to add the white with less decal elements. This will only work on bigger decals such as tail logos or the overwing emergency exit marks.
It is something that I am still experimenting with but that the upcoming liveries will be designed having this in mind.

Wish you all have a very nice week!