Very bad weekend for me as several of my pets passed away.

Did not have much time but I started the new cargo loader which will be based on the “Universal” model of the Commander FMC15i.

What is going on with the other cargo loader being out of stock and why this new one? For the same reason that things evolve because they can be improved, I want to evolve the GSE catalogue, the previous cargo loader gave me a lot of experience and also a lot of troubles, the model wasn’t made having in mind how the molds had to be done later on, the cross bars gave me nightmares since I wanted them to be movable… and the nightmares continued after casting where I spent hours to “clean” every single kit.

What will be different on this cargo loader? It will be more accurate, I’ve taken a better look at the thickness of the elements, the detail will be a little bit sharper, there will be extra care on details which means there will be extra parts as well.
The previous cargo loader made was the “wide” type, this one is the “universal”, meaning that the bridge will have double sill to reach the main deck of cargo aircrafts such as the B747.

If I can make it more accurate is thanks to Michael who provided me of lots of references making this project to be as detailed as I want it to be, so a big thank you goes to Michael for the big help.

Leaving aside the movable parts since it is not possible to make them movable within scale limits, the sills will be easily interchangeable, meaning that you can set different heights and also a single sill will be featured so that the universal can be transformed into “wide” which can be used on lower deck assignments.

For the first time I will also be working on figures (or figurines), figures give life to these models, and although there may be something on the market already, I want to make these specifically to match these GSE posings.

I want to take the chance with this post to say that there will be a change in the GSE models of the catalogue, being honest, some smaller GSE does not sell at all, which makes me wonder wether they do not fulfill customer likings or either they are too expensive for what they are, so I am exploring some possibilities to make some of the GSE more “photo etcheable”.

3D printing is a big competitor I guess, and maybe someday I will move to that technique, still, I wouldn’t feel the same without my hands actually working on the item, call me old fashioned but I do appreciate the work that it is done with the hands.

Here is a photo that ilustrates how I start the projects: 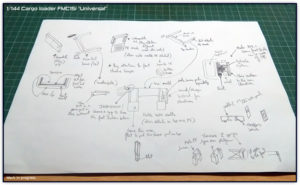 I sketch and write how the parts are going to be made, but the difficulty resides in that those parts need to be made in a way so that they can be casted later in resin (prepared for mold making) and built by another person other than me.
So I have to think how the parts will join one with the other, and without forgetting that scale is one of the most important factors when making these tiny models, making something 0,5mm thicker would be pushing the part 72mm on the real deal.

Here is a part of the frontal and part of one side panel: 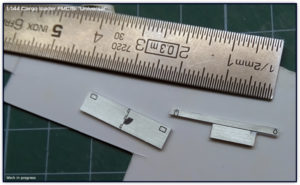 This cargo loader will later be “ported” to the 1/200 scale, which will be even harder to make than this, but still I want to explore a little bit further the 1/200 scale and make some items, I am however considering whether these 1/200 GSE should be sold as a kit, or as a finished/painted product.

I have to say that I won’t be giving too much updates on this project, the reason is that it upsets me that I can’t share anything finished, I am working on the 747 cargo project, the B737 1/12 cabin, and now this, so I know it may be upseting just seeing a tiny step every weekend.

I want to focus working on these items, and prefer to share when I have something to share. The B747 cargo deck set has the FWD cargo holds nearly finished and I will start with the AFT cargo holds soon, this project will be progressing along with the GSE models (cargo loader and other stuff) because my goal is have those new GSE finished at the same time I complete the B747 deck set, the final goal is a totally complete cargo loading scenario.

During the week I will write an update on regards July’s livery decal releases, there will be a couple specials A350’s, but still, need to manage a little bit better the supplies.