It was about time that I gave an update on how are things going.

Finally I can say that the workplace has been set at 95%, you should probably know that it was not as simple as redecorate an actual room, but the workplace I had shared and still shares some other stuff, so in a way it is still a storage room (it is merely 25% storage room now).

For this very same reason, there have been lots of things that had to go, old clothes, old furniture… there was so many stuff lying around that the floor had to be painted in 3 steps. Many trips to the recycle center in order to make room for the equipment and for me to work in a better and cleaner environment.

Speaking of environment, one of the changes that will come in September and that it is currently the second main reason of why there are basically no stock of items at the store is the acid used in the photo etching process.
Reached this point I had some liters/gallons of acid that had to leave because it was already dirty after the use, my surprise was that the two recycle centers I went neither of them accepted such type of residue and did not give me any advice on what to do with it.

They accept car batteries, but I do believe the acid used in those batteries is more hazard than ferric acid. Still, not even the seller replied me on regards recycling this product, so after reading and searching on Internet, I found a way in which I can try to neutralize this acid and impact as less as possible with nature.

Having said that, I will use a cleaner substitute for the ferric acid, which will be copper sulfate. It is a little different process and again, due other changes in the photo etched process, some tests will need to be done to find the right setup, right exposure times, etc. It is always a trial and error process with most of these things.

Now on regards the GSE and also the lack of availability of them at the store. I am currently producing a new range of GSE, 99% of items that I made in the past are now computerized, so between times reorganizing the workplace, I also had an intense 3D course.

Items will still be resin made, but the process is now totally different and as I explained with the acid, a lot of tests are currently going on.

So far I can share some photos of some of the tests that I’ve done so far, with two new models substituting the old Tug MA50 and the belt loader. This time the tractor is the TLD JST-25 and the belt loader is the Tug 660. Other models such as the towbarless pushback AST-1, GPU C690 etc are still the same model, and a new GPU of TLD has also been made. 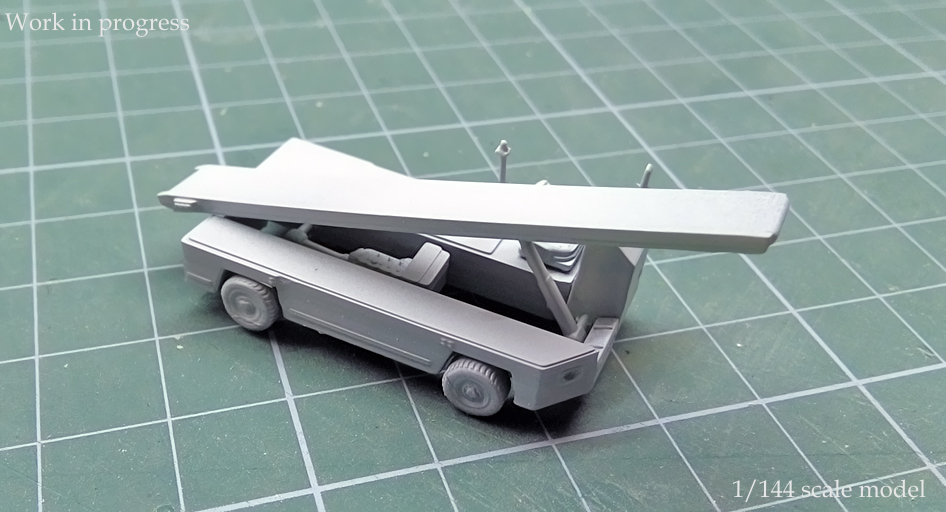 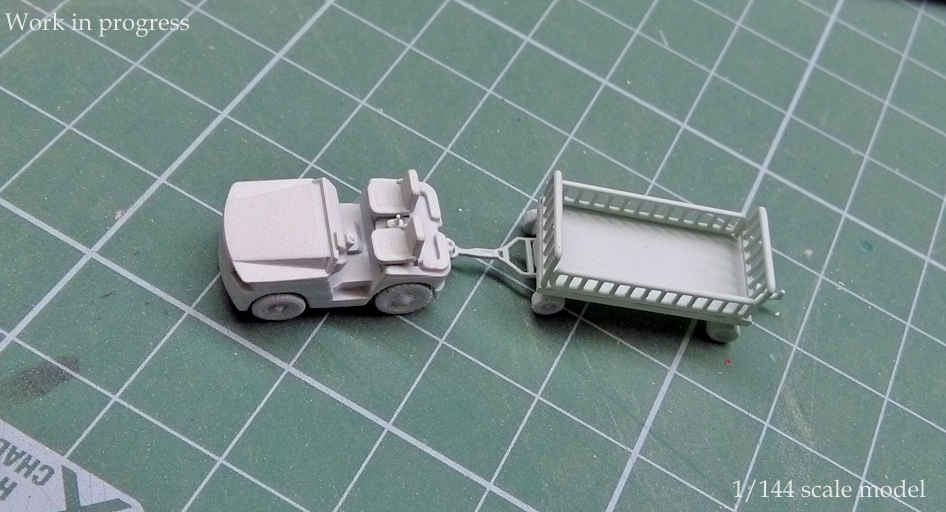 Keep in mind that what you see, will also be produced in 1/200 and 1/72 scale, so each scale will require some modifications as well as modifications on the photo etched parts. Most of the parts such as rails will already be solid in the 1/72 scale, and some that used to be photo etched in the past for 1/144 scale, will now be solid/round such as the steering wheels, the towing bars etc.

The 1/200 scale will be the smaller scale of the family, thus I will try to keep as many detail as possible, although some will be virtually impossible and photo etched will be used instead.

Because these items and others not shown yet are new, photo etched will be designed specially for them,  thus some extra time will be required, same applies for the decal design which for some, the artwork will be readjusted.

It is a very big effort, these days I am thinking that this is like starting fresh, but I know that if I keep working hard, results will come.

I will continue doing tests every day to obtain the best results I can offer to you guys, this does not only end here, as I plan to do other parts and figures.

Lastly and although I can’t confirm it 100% because I haven’t had the chance to test it yet, a very good friend of mine has provided me with some renderings and models made acording to real Airbus geometry for sharklets, therefore some of the parts that I will include in the catalogue will be true to the real deal. He has been extremely kind to share this with me and give me the approval to put these items at your disposal for the sake of boosting the modeling experience.

I want to thank everybody who supported me during all this time since I begun and that still do, as I said, to me it is like a new start, so many new things to produce these items, of course I take a look back to see how I used to make things and I see I am taking a risk, but with the results I am seeing I think it is worth to take this chance.

More tests will continue and as soon as I progess, I will be posting here individual items and write a little bit about them, what the decals will be, which PE I want to make for them, etc.

Thank you all for the support and patience!
Best wishes,
Guillem