Things are advancing more with the GSE models. I am at the moment working on the figures for the JST tractor and making the baggage carts. As before, there will be two types, a covered and open version. These sets will still include 3 carts and will include luggage. Due the possibility to make more units, luggage carts will include more luggage than before, still luggage sets will be available separately in case you need extra luggage.

The carts can be build very easily but naturally, you are going to need a pair of sharp tweezers. I wanted to try to make the side rails actually round/solid. In the past these were made with PE and I think that even now being solid, the factor scale is still possible.
I would like to take this chance to say that all the parts will be packaged as seen in the first photo, that means that all the parts will be “assembly-ready”, no base separation is required as it was before. I am aware there are a lot of very tiny parts, so I will put an extra effort on protecting the smallest parts in separate bags making them visible from the bigger parts.

The baggage carts and the pushback tractors are designed so that the towing bars actually fit into position of the tow tractors/other carts. All these baggage carts have turntable front axles.

The belt loader can be seen here with just the wheels and the front of the cabin attached, the whole body will be one piece, making it easier to build than the past version. Also, the model is a different one, this is based on the TUG 660 belt loader. 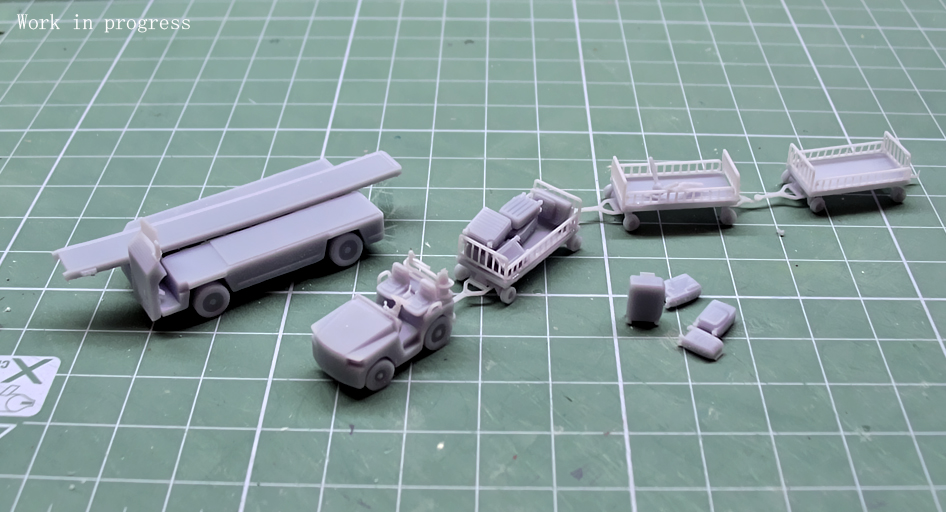 Tests are continuing on, I am also working on the belt loader / tractor figures. The next models I would like to present are the belt loader, the covered baggage cart and the Houchin GPU.

In the meantime, I am also about to start with the etching process, lots of things are going on such as starting to make the new instructions and GSE decals as well, instructions will now be clearer and with better illustrations.

I wanted to thank many of you guys for writing me ideas that I really love and wish to fulfill, this is specially particular in the 1/200 scale, where I see there are many modelers too, so my wish is to equally things that I made so far in the 1/144 scale. GSE models are not going to be the only items I am interested in producing, I will also make other stuff for 1/200 and 1/144 airliners, I am not forgetting the 747 cargo project (and the 1/12 B737 cockpit is not over, just in pause).

Wish you all a nice week!
Guillem