I wanted to give a quick update on the different things that I am working on.

Livery decals: I am progressing with the base artwork for the A320/A321/A320N/A321N details.
I honestly thought it was going to be a bit “easier” having already the artwork, but every single line of the original artwork must be changed to adapt them to the silk screen printing method.
I am taking the chance to include a few more details and also modifying the decals for the belly/wing root area. The decals will be an improvement over the previous ones, plus this time the belly panel lines and rivets will fit on both Revell and Zvezda kits (each will have their own within the same detail set).

I have been able to finally have both kits and I took this chance to make these specific decals to adapt on the Revell’s (Neos) bellies since my original work was based on the Zvezda model.

There are significant differences between the Revell and the Zvezda kit on the wingroot area, not surprising since this difference is also present in the A320 and the A320Neo whereas the Neo version has a taller wall at the wing joint (easily noticeable when comparing the distance of the emergency door lights to the wing).
I am not going to enter in details about each kit pros and cons because I truly find both kits beautiful. Some details lacking on the Zvezda belly will be covered as well with the decals (access panel doors, etc) and some other decals will adapt on the Revell’s model such as the horizontal stabilizer plates.

Work with this continues.

Passenger figures (1/144):  Having done a first test with these figures, I still have to adjust a few minor things, but so far it looks as desired, the set will consist of 26 passenger figures with a mix of women/men/teens and kids. I am going to do another test (hopefully the final one) at the end of the week, so my aim is to be able to show some progress on next Sunday.

Update on the stairs truck: I mention about the micro tubes on my last entry for the next project (the cargo loader) and I wanted to start using that “slide in” system on that project onwards. However, I wanted to give an improvement to the stairs truck that will also improve on my preparation time for the packaging of these units (it was overly time consuming to prepare these two parts in the original release).

The stock of the stairs truck is done, but there is still some more tests to do with these tubes. For this method, two new resin parts have been made (one fitting in the tube and the other fitting on the rod). After the initial test, I will also make two new parts that will make for an easier fitting of the tube and rod to the chassis.

One thing that was concerning me was the paint, the tube is 1,7 mm and the rod 1,5 mm so the rod slides in prefectly, however, paint cannot be used, therefore I decided to use a different rod with already a silver color, so the only part to paint of the two will be the tube which won’t cause any issue for the rod to slide in (painted from the outside).

This update, I would very much like to give it for free to all those customers who purchased the stairs truck. I however cannot ship it for free, therefore shipping charges will be on customer’s end, but there is also the possibility to include these new parts on a next order if desired, I will give more details about this once I have finished the tests. 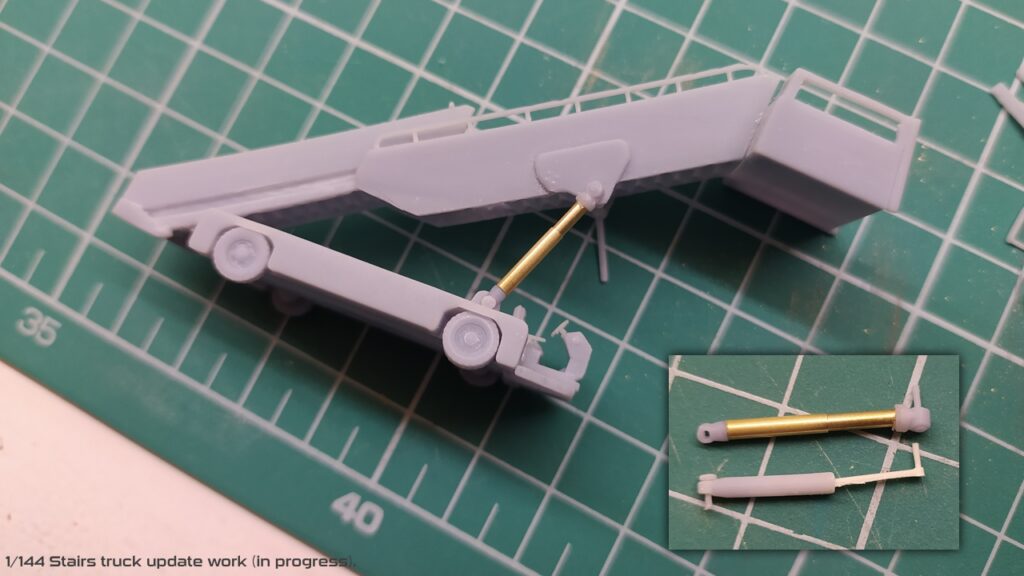 Note the rod will not be brass, instead a silver colored alloy will be used to avoid the use of paint.

Stock units: Stairs truck were going to be released this Friday 28th, however, due the tests with this slide in system and new parts for a better and stronger fitting, I may push this restocking on the second week of October. Stock units are made already.

There will be more units of the 1/144 AST-1, LD3 trolleys coming this Friday. I will also intend to restock the Neo engines and increase quantities of other items.

1/200 GSE items will start production at the second week of October being available at mid October.

Current projects: I am progressing on the 787 forward galley / cockpit, once done, will start with the middle galley. Work continues to fix and adjust the 1/144 passenger figures as well as the work with the 1/144 cargo loader.
The 747 cargo deck detail set and  the 1/12 737 cockpit projects are on hold. I will resume first the 1/12 737 cockpit project at mid October coinciding with the release of the 1/200 GSE models. I will resume the work with the main instrument panel before going for the side walls.

Some not so good news: There may be some bit of delay with the production of the parts due a failure in one of the printers I use. I have been doing some tests during the weekend in order to find out where the problem comes from and so far, no luck, there is still one last thing I want to check before changing the mother board, which is really my last option.

That is all for now, I have several fronts opened with lots of work to do on each area, but I am going step by step with all of them. The 747 cargo project and the 1/12 737 cockpit are currently my two biggest projects and therefore the dedication and time required to planify are so much bigger compared to the other projects. They are by no means abandoned, but until I can have the weekends free, I won’t be able to progress as much as I want, upon the releasing of the next 1/200 GSE, there will be more time for them.