Today I am sharing a couple photos of the progress done so far with the rear galley for the B787. I wanted to share this earlier but it took me more time than I thought. 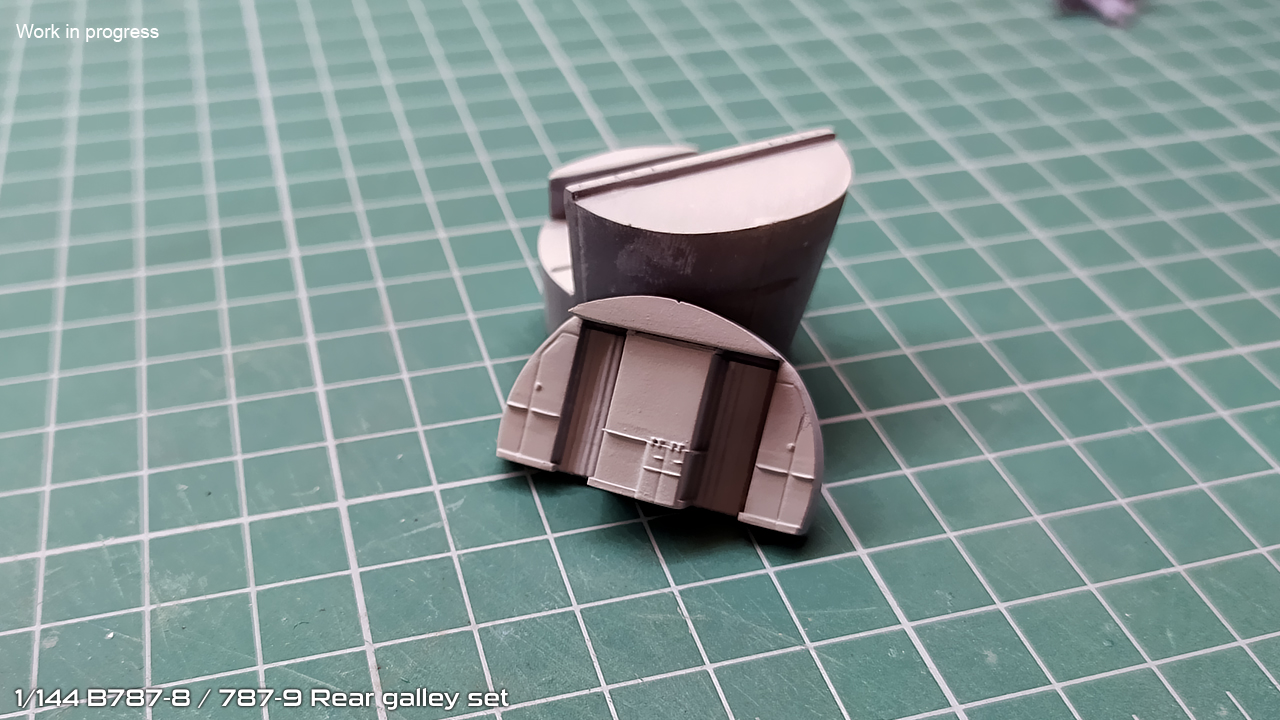 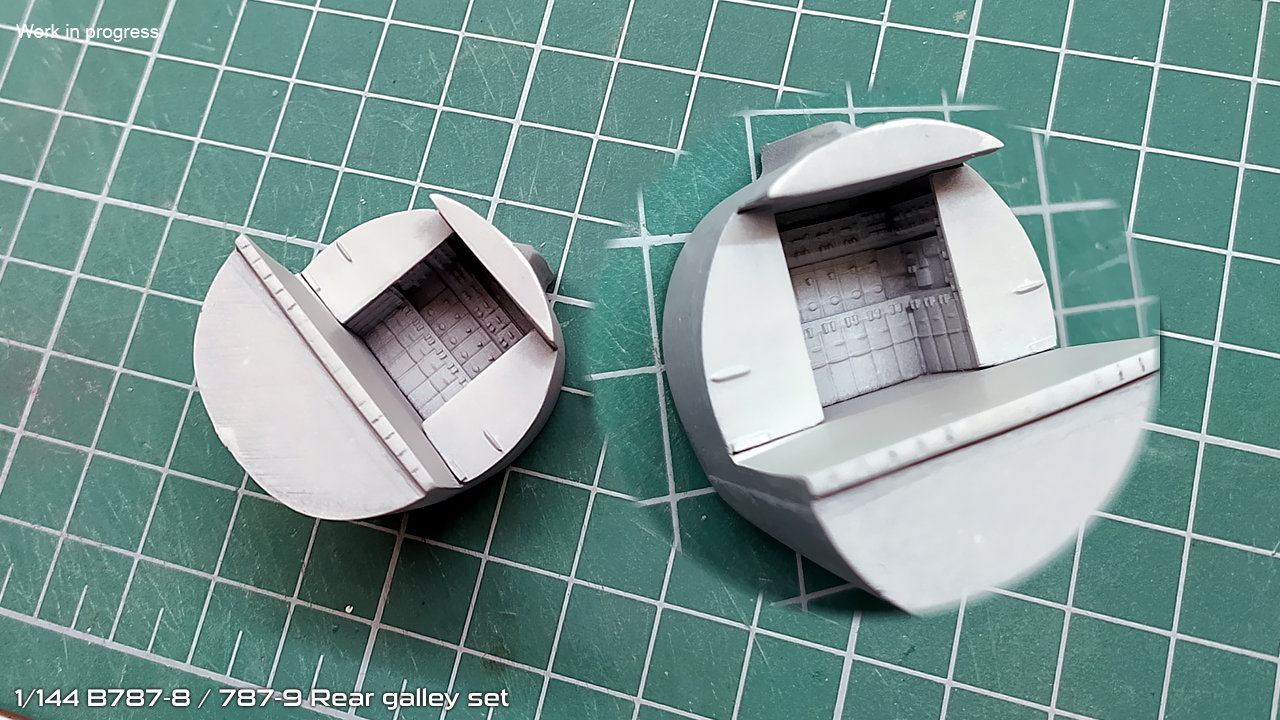 This time I will be making three different versions of the front module for this rear galley. As I have seen in several photos, there are different configurations; some have no flight attendant seats at all and toilet doors instead (like the one here pictured) other version has a single FA seat in the middle and the two toilet doors at the sides, and the third configuration has 3 FA sets, one at the center and one at each side.

I believe that the -9 version is the one that should have the 3 seats due the higher number of passengers, it is obvious that there are also a few more FA in the aircraft. This is a bit difficult for me to clarify because it is hard to know where the photo was taken from, and even so, each airline may have their own customization for their aircraft interiors.

Work continues with this as I have to make the doors and design the photo etch, but so far so good, fitting tests are also done.

These days I have been doing some other tests that are related to the painting of the models and I felt that I always needed maskings for the windows if I wanted to use the clear plastic parts. I can still remember how painful it was to use the liquid mask for the A350 model build I did some time ago, being it so little quantity to add, it became a bit transulcent thus not knowing exactly where the mask was and if it was enough, later it was quite difficult to fully remove it.

Although I know there may be some masking sets out there, I decided to give a shot and try to make my own, so far I have done some tests with the A350 windows and the overall result is in my opinion very good, in the sense that the cut is sharp and the paper is of very good quality. 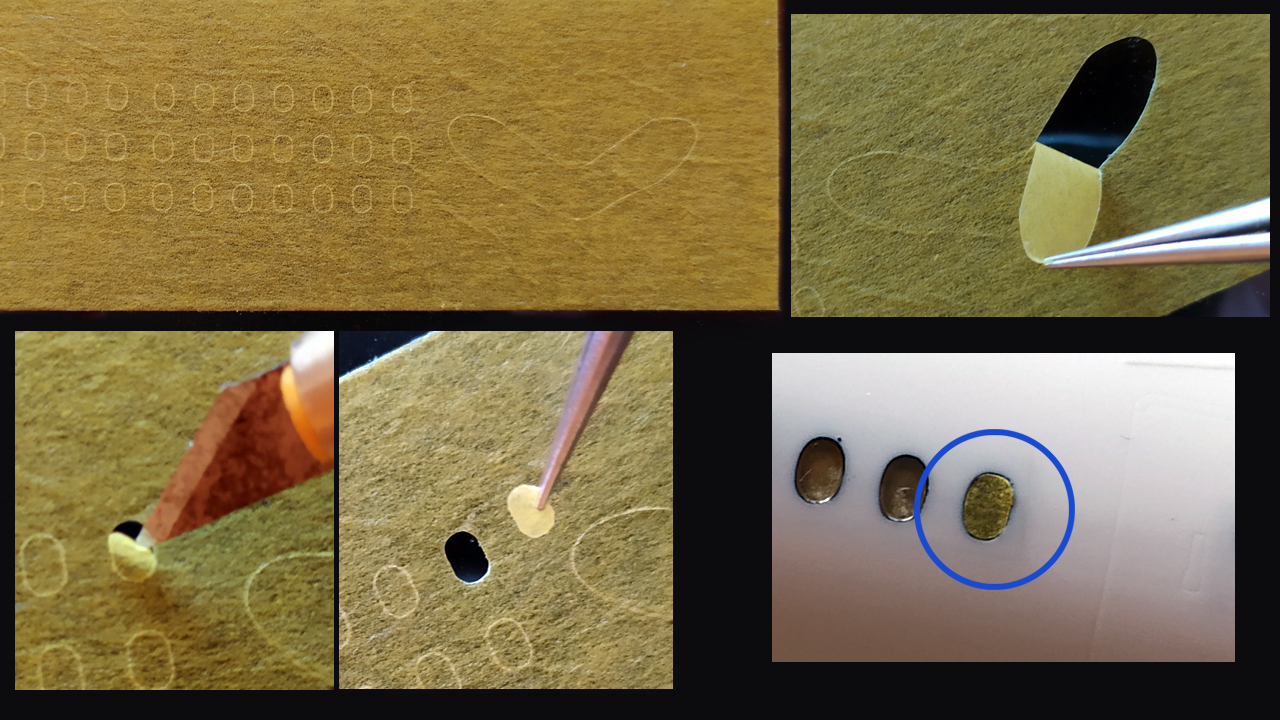 My idea is to continue working with this, and if results are successful, then I may be releasing them for everyone else whom like me, would like to use the clear plastic windows but that find it difficult later to paint the model, this has been in some cases, the reason why I opted to use decals for the windows. It may also be useful for covering the rims to paint the tires so these are other elements I may include in the mask.

Another progress is being done with the livery decals, the artwork is on its final stage and I am doing the last retouching and checks. The artwork will be done and printed but I will also have more work ahead as I plan to change a bit the instruction illustrations.

Restocking of the models will go according to plan as the material arrived delayed only for a couple days, so production has been restarted and the goal to have the Commander FMC15i back in stock at the end of the month is still as planned. I would like to restock other items such as the 787 forward galley set, so I will be putting those items back in stock progressively.
Work continues with the double scissors for the FMC15i, it may be a bit more difficult than I first thought, but nonetheless, the project is pretty advanced and I expect to start the first tests very soon.

That is all for now.
Stay in good health and stay safe everyone,
Guillem